Men around the world can rejoice!  Finally the mystique of what goes on behind the door of a ladies nightclub has been shattered, but what we see may not necessarily be what we were expecting.

Based on the stage play ‘When Woman Wee’, Powder Room follows down on her luck Sam, played with amiable aplomb by Sheridan Smith, on a night out with her former college mate, Michelle who brings along her Parisian friend Jess.   In an attempt to impress the pair, Sam concocts a new identity but with the arrival of her rambunctious friends her fictitious life and real life collide together in the ‘powder room’ of a nightclub. 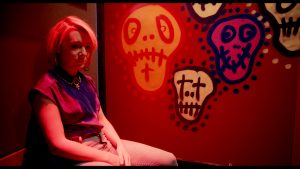 The film opens with a shot of a rain soaked pavement – a sight all too familiar to viewers familiar with gritty British cinema.  However, the titles then explode on to the screen in a vibrant, and energetic opening montage that introduces us to all of the key players within this story.  There is a stark dichotomy between the gritty, familiar feel that tends to dominate British cinema and director M.J Delaney’s colourful and expressionist debut film.  This is a confident debut from M.J as she attempts to fill each frame with a sense of flair without overpowering the comedy and drama within it. 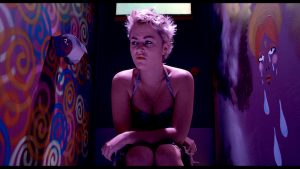 The central character of Sam is our everyman.  She is experiencing a ‘quarter life crises’ and is keen to declare ‘I’m not depressed’.  Keen to impress her former college buddy Michelle, played by Kate Nash, Sam is not only lying to her former friend but also lying to herself.  The moral centre and only real honest character amongst the group is Chanel, played by Jaime Winstone.  Chanel is frank and honest about her attitudes towards sex and Winstone’s performance is lively, fun and very funny. By contrasting Sam and Chanel the film explores perception by filling the mise en scene with reflections.  Characters constantly stare into mirrors, take pictures of one another and pose for shots on camera phones and spy on one other on Facebook.  The film is keen to explore perception and how we measure success and failure.  The film’s highlight is in the character of the toilet attendant, who is by far the happiest character of the lot.  Her position of employ can be seen as lowly, but she looks over the affair with a maternal position of authority and she provides a great deal of dramatic pathos.    Paired with this exploration of perception is nostalgia for being young and free from responsibility and many female viewers will undoubtedly identify with the different ages of womanhood on screen. 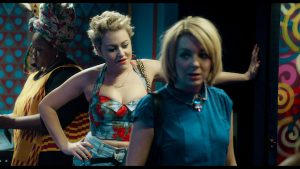 It is refreshing to see a film without any significant male characters and it will surely draw comparisons with Bridesmaids as a result, and there are certainly links between the two.  Frank conversations about sex and crude humour abide in both but Powder Room is typically British and it feels somewhat reminiscent of the ‘ladette’ TV comedies of the 90s, such as No Angels.  Some viewers may be shocked by the crude toilet humour, conversations about anal sex and scenes of drug use.  However, the film is entertaining enough and a British audience will revel in the sights of the all too familiar rain soaked queue for the nightclub and the audible, overcrowded interior. 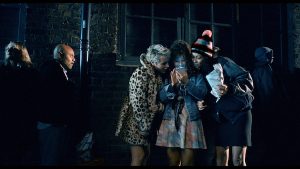 However, there are some issues with this film.  The extended musical numbers provided by band ‘Fake Club’ become irritating at times and the film rushes towards its ending with a running time of only 86 minutes.  Nevertheless, unlike Sam this film doesn’t try to be something it’s not and, in a confident feature film debut, M.J Delaney has made the most of a modest budget to gives us a surprisingly enjoyable night out with the girls. 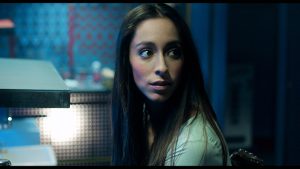 Powder Room is in cinemas on 6th December.