Starting off with a figure rising up on a rock while some waves crash around him, soon followed by imagery of crows flying through the air and overcrowding the sky of a small town, Let Us Prey could easily be dismissed at the start as nothing more than a rock music video (something for Nine Inch Nails, perhaps). Thankfully, things develop quickly into something much more interesting. Also, that imagery is a very cool way to start the whole thing off.

Liam Cunningham is the man who wanders into a small town and starts to oversee some violence and nastiness. He may not seem like the orchestrator of events, being held in the local prison as he is, but it’s all his doing. Most definitely. Pollyanna McIntosh is PC. Rachel Heggie, the newest cop on the block. In fact, she’s heading for her first shift when she sees a young, reckless driver (Brian Vernel) hit Cunningham with his car. Or so it would seem. There’s no body, which makes things interesting when she takes the young man to the station, where she meets her new boss (Douglas Russell) and her colleagues (played by Bryan Larkin and Hanna Stanbridge). Things get even more interesting when Cunningham wanders in, appearing to be concussed and unwilling to communicate verbally. He eventually speaks, although it turns out that people are disconcerted by what he has to say. And then the killing starts. 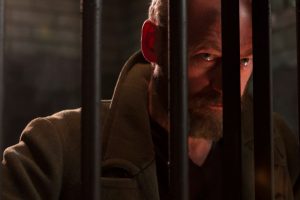 Written by David Cairns and Fiona Watson, and directed by Bryan O’Malley, Let Us Prey has a pretty great premise that should interest and please horror fans. The imagery is sometimes nasty, and sometimes just subtly unsettling, and the script has some great lines and an interesting central strand, supplied by Cunningham’s character, that puts a nice spin on the proceedings. It also deserves praise for not being a sequel, remake, reboot, or zombie movie. In fact, the film it most closely resembles is the first half of Storm Of The Century, which isn’t a bad thing at all.

Unfortunately, all of those good aspects of the movie are almost undone by some pretty atrocious acting. Cunningham is superb throughout, as most will expect, and this is a fantastic role for him to have fun with. McIntosh also does well, even if it’s far from her best work, and Russell is at least fun whenever he’s onscreen. The rest? You can pretty much dismiss them all. Larkin and Stanbridge would have escaped unscathed, if they didn’t misjudge their performances in the second half, but Niall Greig Fulton, Jonathan Watson and, especially, Brian Vernel all swither between being slightly painful and laughably bad. I’m sorry to say it, I really am, but there’s no way to review the movie and not point out the biggest problem that it has.

Once the end credits roll, try to focus on the atmosphere of the whole thing, the fantastic score by Steve Lynch, the enjoyable backstory that reveals a lot more about the character played by McIntosh, the gore moments, and the absolutely loopy finale. That should help make it easier to overlook the bad acting. That’s what I did anyway, which is why I rate the movie above average. Despite the flaws, I think most horror movie fans should at least give it a watch.