“TEN out of ten for style, but minus several million for good thinking,” as Zaphod Beeblebrox might say, to the marketers of Rio, or whoever it was who conceived the strapline “this turkey can’t fly”. 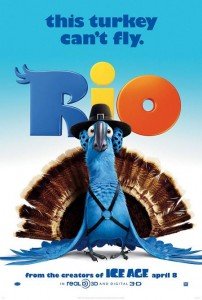 Well, you’re asking for it, aren’t you. And for no reason: Blu, the flightless bird in question, isn’t even a turkey. So I attended the screening in Leicester Square, armed with discerning co-critics in the shape of my children, and figured that, worst case, at least I had a title for my review.

The kids enjoyed it happily enough. I didn’t. It wasn’t a turkey, as such – Turkeys are fun to watch the same way Candid Camera is – but more of a damp, er, squab. (Sorry folks). For any parent who has owned a DVD player in the last decade, Rio will feel very, very, tiringly familiar.

I like reviewing. I take it seriously, and I try to come up with a novel angle and provide new and thoughtful remarks for each picture I see. This is sometimes hard, but on occasions like this, it makes me positively resentful: why should I expend imaginative thought on reviewing a picture when the film makers themselves didn’t bother when making the damn thing? Why don’t I just create a review-by-numbers?

Now it’s no secret that Hollywood has a “magic formula” for its successful dramas, bequeathed to it fifty or more years ago by Joseph Campbell in a still-referenced book called “The Hero With A Thousand Faces”. Indeed, it has been suggested that there are only seven basic plots in all of literature. Certainly, most popular commercial films (even serious ones) cleave more or less closely to one of these fictional archetypes.

But of late this adherence to formula seems to have gone to a whole new place, especially in this new genre, the digitally animated children’s movie. It’s a genre I declare officially mature, established and subject to rapidly advancing decrepitude. Rio (and Mars Needs Moms) are my evidence for that claim.

Nowadays it is not just plot but scene, casting, characterisation, colourisation and disposition that are done by rote: you fancy someone at Disney has drawn up something like a pilot’s checklist for script vetting. Each new offering at most adds a new trope or contrivance to the library of available memes. As the library grows, the more memes there are to chose from, of course, and the less incentive there is to create new ones. The assembly of a film in this way becomes modular; a matter of supply-chaining.

So it is with Rio. It is a classic journey of self discovery. Blu, a Brazilian macaw hatchling, is snatched from his nest and whisked away to captivity far from his native land (cf. Finding Nemo). He even has a Nemo-esque physical disability: he can’t fly.

Of course, he winds up back in Rio, and there contrives to meet a truculent paramour (cf. Stuart Little), be captured (again) by dastardly but inept animal traffickers (cf. Garfield), escape with the help of fellow captured animals (cf. Nemo again, also cf. Toy Story), be captured (again) this time by a dastardly big bird (cf. Stuart Little again), confront his fears, fall in love, while his owner falls in love too, and confronts her fears, and so on and so on.

This is accompanied (or interrupted) by a set piece so strikingly resemblant of the jungle boogie in Madagascar that the litigious type might sue over it. Even Avatar is scene-checked. All this in the context of a dull script, badly delivered jokes, and adventure/chase set pieces designed to show off the technical department’s digital wizardry (fellas, we get the picture: you can do cool stuff with computers. How about doing some cool stuff with celluloid?) that have the wit and wisdom of your average seven year old.

Admittedly, this is aimed at your average seven-year-old but, as Pixar has shown repeatedly, that’s no reason a film can’t be brilliantly funny for all ages.

In a poor game there is still a man-of-the-match performance from Flight of The Conchords’ Jemaine Clement as Nigel, a baddie cockatoo – one of the more convincing screen villains of recent times.

I can’t deny my children were entertained (by comparison they were positively aggravated by Mars Needs Moms). Therefore it isn’t, in all honesty, a turkey. But it doesn’t fly.