Ryan Reynolds plays a cop named Nick who gets killed on the job. That’s not a spoiler. Even if I hate a movie, and I didn’t actually HATE this movie, I don’t spoil things for others. No, Nick’s death can be seen in both the trailer for R.I.P.D. and also the first 5-10 minutes of the movie itself. It’s what happens to Nick after he dies that provides the storyline for this action comedy. He joins the Rest In Peace Department (hence the title) and is partnered up with old, grouchy Roy (Jeff Bridges). Good job, really, as something big is about to go down. Something that may be connected to Nick. 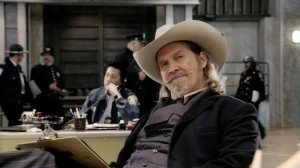 As many people already noted when the trailer first appeared, swap out the supernatural elements of R.I.P.D. for some sci-fi and you have, essentially, Men In Black. If Men In Black wasn’t a very good film. That’s the biggest problem that this movie has, and most probably the reason for its disappointing return at the box office. It retreads ground that’s all too familiar to blockbuster movie viewers, a viewing demographic that’s usually very forgiving.

It’s hard to figure out just who should shoulder most of the blame. Perhaps writers Phil Hay and Matt Manfredi, who were helped out by David Dobkin as they developed a storyline from the Dark Horse comics. They certainly don’t lay a solid foundation. The storyline is childishly simple, which would be fine if the rest of the film made up for that fact. It doesn’t. Viewers are left with a couple of unsurprising twists and turns, a sprinkling of unfunny one-liners and one or two half-decent set-pieces.

Director Robert Schwentke might be the one to blame. After all, he takes the script and the cast and the special effects and delivers something so average that it’s hard to believe, especially when thinking of the mix of elements involved – cops, ghosts, Bridges having fun alongside Reynolds.

Bridges and Reynolds. Come to think of it, perhaps the final result is their fault. Reynolds must surely be viewed as a jinx by now when it comes to movies based on comic books by now (I may be the only guy to have mildly enjoyed both that X-Men Origins: Wolverine movie AND The Green Lantern, the former because of the cast and the latter because of Reynolds in the main role, I like him). He’s far from the worst thing in this movie, but he’s once again saddled with a team that doesn’t seem to know how to use him. Bridges is, to be blunt, frankly embarrassing during many of his scenes. His mugging and gurning does nothing to add to the movie and a backstory, obviously meant to evoke some sympathy, isn’t worth the little amount of space that it’s given. Kevin Bacon does a decent enough job, Robert Knepper has fun in his small role, and James Hong and Marisa Miller are amusing simply because of who they’re supposed to be portraying.  Stephanie Szostak is stuck in a thankless role, but Mary-Louise Parker evens things out slightly, brightening up the movie whenever she’s onscreen.

All of the criticisms may have people thinking that I hated R.I.P.D. (a sentiment that many others have been quick to voice) but I didn’t. I was just disappointed by it all. The laziness, the boring inevitability of it all, the reliance on special effects to make up for a paper-thin plot and poor script. Much like the lead characters, it’s enough to bring down your very soul.

But I only started feeling that badly about it after I’d left the cinema and my tummy had lost the comforting glow of the popcorn, fizzy juice and “fast food” film I had just sat through.