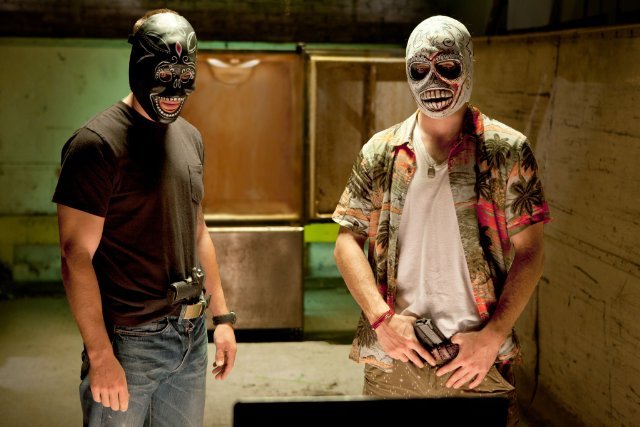 The first thing Savages does is to pull a punch: in a sweaty basement imprisoned Mexican workers are captured on home video suffering atrocities, off screen, at the hands of a chainsaw-wielding sadist. It’s meant to be a bracer, but it doesn’t quite shock because it implies, and is followed too quickly by opening credits scrolling prettily over Southern California sun and sand, beautiful people frolicking in rolling, reverb-drenched surf guitars.

An odd dissonance: an opening which doesn’t know whether to be Arthur or Martha. It’s kind of a theme.

Over stylish fast-cut editing we meet our narrator, a girl called O (Blake Lively). O (for Ophelia, which we’re helpfully informed is from Hamlet) is the fulcrum of the film, and she introduces dual heroes Ben and Chon, both of whom are her boyfriend. Dual heroes. They’re good drug dealers. We meet some bad ones soon enough: the dudes with the chainsaw.

Amongst our dual heroes we have a sensitive one, Ben (Aaron Taylor-Johnson) and a hard bastard, Chon (Taylor Kitsch). They are a Cheech & Chong for the net generation: they’re even name-checked that way. Only they’re not as funny. They share O: it’s a yin and yang thing. A Bizarre love triangle, then? Some submerged fear and loathing between the beaux? Underplayed. Implausibly underplayed. Thus the whole three-way relationship, which you would think would ooze of it, seems contrived.

In any case, why have two heroes, if not to harvest the drama that flows from the submerged resentment between them? It is as if Oliver Stone can’t make up his mind: it speaks to a muddle-headedness with which the picture is shot through. For now, though, no matter: early exchanges are slick, voguish and handsome, being not troubled much by way of plot exposition.

Things start to fall apart when Stone moves onto that job. To do so he dials back the modish editing, but without that distraction, a preposterous screenplay reveals itself. The vibe is confused: my best guess is that Stone is shooting for Quentin Tarantino’s blend of irony and brutality, but Savages isn’t nearly cool enough to carry it off. For one thing, Stone doesn’t trust us to be hip to his references, so explains: “IED – that means improvised explosive device”. (We are told this particular fact twice.) Perhaps this is meant for viewers who are thinking of the contraceptive coil.

Now a Roberto Rodriguez or a Quentin Tarantino would never patronise his audience in that way – he would expect you to keep up: no concessions for laggards; and when he sought ironic belly laughs he would therefore get them. In Savages, the theatre’s laughter, which grew bolder as the picture wore on, was not ironic. It was embarrassed: Did someone really ask Benicio Del Toro to say that? And he did?

Del Toro, then: The more we see of him and his cohort of Mexican provocateurs, the less menacing they are. Del Toro’s accent is direct from Ren & Stimpy.  He wears a ridiculous wig. Despite doing despicable and ultraviolent things he seems content to play for laughs.

His boss, also in a ridiculous wig, is Salma Hayek. She is a drug lord. Salma Hayek a drug lord? Good lord. Poor Hayek is way out of her depth, hobbled by an atrocious script and required to play a character riven with so many contradictions it is a wonder she doesn’t spontaneously implode: by the end of the picture, fairly much, she has done. In the mean time, characters labour over exposition, frequently telegraphing it to each other – literally – over skype. But then, for daggers-drawn blood rivals, they also spend more time than I would visiting each other boldily. Especially since they’re meant to be in different countries.

In fairness, Stone keeps the pace up and the picture is never less than entertaining. John Travolta has a whale of a time as a bent DEA agent playing every angle, but this is not his Pulp Fiction of the 2010s.

Fundamentally, the flimsy superstructure of Stone’s enterprise has no chance of supporting the colossal weight of ludicrousness that Don Winslow’s premise hoists upon it.  By the time we get to the most equivocal ending I can remember – yet again, Stone seems to want to have a bob each way, as if the focus group screening came out split 50/50, so he puts both endings in – the whole edifice is strewn across the landscape, a blast radius wider than one of Chon’s IEDs*.

*That’s “improvised explosive devices” in case you were wondering.

Savages is in cinemas 21st September.