Where to start with the absolute joy that is Saving Mr Banks? Maybe from the beginning when it was announced Tom Hanks would be playing Walt Disney and Emma Thompson would be taking the role of P L Travers, the author of Mary Poppins. Add in the storyline of how Mary Poppins was transferred from page to screen and all of my dreams suddenly came true. Aside from the film production plot, it also has the story of Mrs Travers’ (never anything else, especially Pam) childhood which for fans of her book is an amazing addition as it shows where she drew inspiration from for her beloved book. So we have Tom Hanks as Disney in a film about the making of Mary Poppins with Emma Thompson playing Mrs Travers reflecting on her childhood as rehearsals take place around her. Amazing. And then I sat down to watch it. 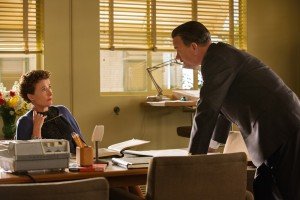 Emma Thompson gives Maggie Smith a run for her money as the uptight Mrs Travers who “cannot abide” cartoons and is horrified at the prospect of her book being made into a musical. She stalks around in tweed suits with a tight lipped expression permanently on her face making demands of Walt Disney and his team which they must abide by as she has refused to sign the rights over. Her expressions and put downs would make Maggie Smith proud, especially during the first rehearsal when she demands to know what “ext” means on her script. After being told it’s an abbreviation she asks if it can be changed and replies with “I will” to the chorus of “Nobody will see it”. She’s a wonderful character and it’s hard not to love her as her flashbacks to her childhood show us why she is like she is. Tom Hanks is equally brilliant as Walt Disney as he drags Mrs Travers to Disney World and hands out presigned cards to fans. Together they make a wonderfully mismatched pair fighting the same battle on different sides. 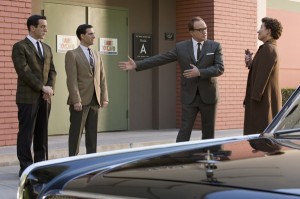 I can’t leave this review without writing about my favourite scene. I’ve been singing Let’s Go Fly A Kite for days now and it’s all due to this one scene. Of course, throughout the film the songs from the musical pop up in rehearsal scenes and the score is based around Chim Chim Cher-ee. But the one time we’re allowed to listen to an entire song is in the glorious scene when the writing team performs Let’s Go Fly A Kite for Mrs Travers. In previous scenes, she doesn’t look impressed as songs are played for her but here something changes. Her feet start tapping, her face softens and all of a sudden she’s dancing and singing along. It’s a lovely scene filled with joy and the promise of the amazing film Mary Poppins would become. If I could watch it on a loop I would. 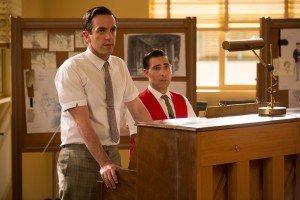 Suffice to say Saving Mr Banks was everything I hoped it would be, and more. My poor fellow critics who had to put up with me immediately afterwards will probably testify to just how giddy with joy I was. This film is joy personified. It’s sharply funny, touching and involves Jason Schwartzman singing some of the songs from Mary Poppins. It will have you crying with happiness (I genuinely had tears of joy running down my face) and singing for the foreseeable future. As an extra bonus, during the end credits there’s a recording of one of the actual rehearsals that took place with Mrs Travers herself explaining the character of Mr Banks to the writing team. It’s a wonderful way to end such a lovely film, and a wonderful way to end a brilliant London Film Festival. 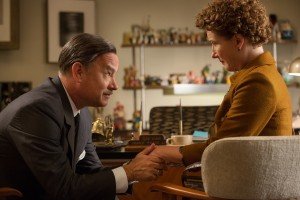