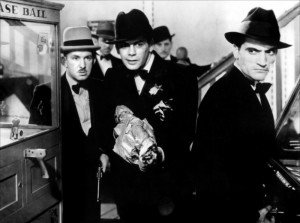 That’s how Scarface begins, a number of title cards making these statements and boldly encouraging audience members to actively participate in a change for the better. I don’t know whether these were genuine and honourable intentions or just a way to try and placate the censors of the time but what I do know is this – Scarface remains a rollicking good gangster movie.

Paul Muni plays the main role, Antonio “Tony” Camonte, the gangster who grows impatient while working to make his boss (John “Johnny” Lovo, played by Osgood Perkins) more money. With the help of his right hand man, Guino Rinaldo (played by George Raft), he starts getting rid of competition quickly and ruthlessly. He also incurs the wrath of his boss, not helping himself at all by wooing his woman (Poppy, played by Karen Morley) at any opportunity. And he also makes time to stop his sister (played by Ann Dvorak) having any fun.

Directed by Howard Hawks and Richard Rosson, Scarface is a treat for anyone who loves a good gangster movie. It’s all here: the violence, the betrayals, the jealousy, the rise and fall of big men with guns. The script had a lot of people involved at various stages but the whole thing was based on the book “Scarface” by Armitage Trail, a man who knew what he was writing about, and many incidents depicted onscreen were based on the exploits of Al Capone, although this was strenuously denied at times.

The acting is generally great. Muni is far too cocky throughout and gets by more due to his ability to go further than anyone else as opposed to any great brainpower or superior strength. George Raft, Osgood Perkins, Karen Morley and Ann Dvorak are all great and there’s a small, but important, role for Boris Karloff (excellent here in a non-horror role).

Controversial at the time, the film may seem tame nowadays but it still has a lot of darkness bubbling under the surface that would come to the fore just over 50 years later in the remake from Brian DePalma, especially in the strange relationship between Tony and his sister. Essential viewing for fans of the subgenre. 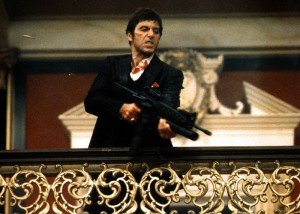 The rise and rise of gangster Tony Montana (Al Pacino in a role that remains one of his very best), as depicted by Brian De Palma, remains as riveting today as it was in the 80s and 90s for a variety of reasons. In fact, I mistrust anyone who doesn’t have The Godfather, Goodfellas and Scarface as their holy trinity of modern gangster movies.

Scarface opens, as the original movie did, with a statement of context. This is what we get at the very beginning: “In May 1980, Fidel Castro opened the harbor at Mariel, Cuba with the apparent intention of letting some of his people join their relatives in the United States. Within seventy-two hours, 3,000 U.S. boats were headed for Cuba. It soon became evident that Castro was forcing the boat owners to carry back with them not only their relatives, but the dregs of his jails. Of the 125,000 refugees that landed in Florida an estimated 25,000 had criminal records.”

The tale may well be based on the original movie, written by Howard Hawkes and Ben Hecht (who both receive a dedication in the end credits) and developed from the novel by Armitage Trail, but this is a very different America and Tony Montana is a very different type of gangster, a world away from the comparatively civil and predictable gun-wielding figures of days gone by.

But while there are many, many differences between the two Scarface movies it’s really quite impressive just how the remake weaves the heart and soul of the original throughout its gaudy, excessive trappings. Oliver Stone deserves high praise for a screenplay as insightful as it is profane. The Scarface of today may deal in drugs as opposed to prohibited alcohol but he still wants everything too fast and too easily, he still falls for a woman that he shouldn’t (but who can blame him for wanting the gorgeous Michelle Pfeiffer?) and he still has a worrying attachment to his younger sister (played this time around by Mary Elizabeth Mastrantonio).

I’ve always maintained that De Palma succeeds in his movies when the material matches the audacity and excess of his style and Scarface serves as a prime example of this. Watching Tony rise swiftly and surround himself with 80s excess allows De Palma every flourish and dazzle that he could want to put onscreen.

The acting is superb. Pacino – I don’t even have to say any more about his performance, it is rightfully praised in many, many other reviews and articles. Steven Bauer is wonderful as Manny, Tony’s friend and right hand guy (a role very similar in some ways to the role played by George Raft in the original movie). Michelle Pfeiffer is beautiful and cold as Elvira while Mary Elizabeth Mastrantonio is young and full of fire as Gina Montana. Then we have stellar turns from Robert Loggia, F. Murray Abraham, Harris Yulin and Paul Shenar, a favourite of mine.

Almost as entertaining as the movie itself is the way in which Scarface has become a hip-hop icon, a legendary figure that many look up to and even aspire to, in some ways. The fact that so many of those who look up to Tony Montana ultimately miss the many points that the movie makes is a sad irony. It just goes to show how well De Palma couched the commentary in style and star power. Nothing exceeds like excess. Indeed.

Scarface (1983) lands on Blu-ray on 5th September here in the UK.  Extras include a number of featurettes both old and new (most of the supplementary material here will be familiar to those who own the 2-disc DVD but it’s always fun to see how Scarface was cleaned up for TV), some promo material about the making of the videogame, a Scarface scorecard that counts the number of f-bombs in the movie and number of bullets (pointless but undeniably fun) and a picture-in-picture feature that intermittently brings up various people to discuss the movie (including the likes of Eli Roth and Antoine Fuqua) and also, perhaps most interesting of all for fans of the film who also enjoyed the original, compares certain key scenes with the way in which events were depicted in the 1932 movie. Why don’t you rush to your nearest retailer and say hello to my little friend.