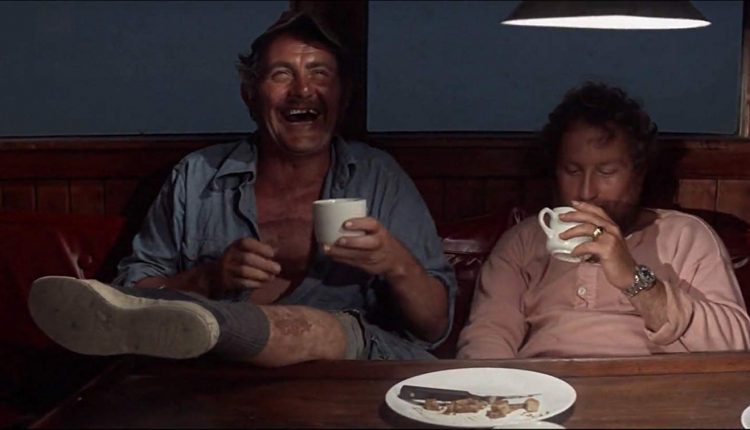 Scene Stealer: A Moment of Relief in Jaws

There isn’t often a time when Jaws (1975) is on the telly that it gets neglected and remains unwatched.  It is one of those films which can be watched time and again yet still remain fresh and enjoyable.  Like a good fry-up.  Like a good fry-up which consists of different items of food, Jaws comprises of some pretty good and hefty scenes. One subtle scene showcases the bond between father (Chief Martin Brody, Roy Scheider) and son (Sean Brody) after a hard day’s policing.

But that’s not the scene which steals the show for me.  Nor is it the Ben Gardner’s boat scene, which is in itself, a good little scene! No, the scene in question features Brody, Hooper (Richard Dreyfuss) and Quint (Robert Shaw) gathered around a table, discussing battle scars and having a good-old sing-song.

It sticks in the mind as a relief scene- we get to see harsh-mouthed, bad-tempered Quint in a whole new light as well as revealing some back story of his, going some way to perhaps redeeming his character in the eyes of anti-Quint viewers (there are some odd folk out there).  It adds a certain amount of levity- check out Brody’s battle scar story when compared with the other two’s.

I guess since the dawn of time, men have constantly been comparing…this scene pays a nice homage which is relevant today, over 40 years later! Not only does the scene have some humour and gives the chance for the audience to breath, it also builds the tension back up perfectly.  Showing all three characters spontaneously burst out into the song, “Show me the way to go home,” contrasted against the floating barrel approaching the Orca, creates a fated tension, ensuring the audience know that there will be trouble at sea.

Towards the end of this scene, the transition of emotions is iconic, from being up-beat and in a feel-good state, to the realisation and dawning of knowledge…this scene sticks out as one of the best in an already scene-stealerific master piece.

Unsure if Jaws is for you?  Check out our review here.

Which scenes from Jaws do you think trump this?  As ever, comments below!