Ben Stiller’s Walter Mitty of 2013 has a passing resemblance to Danny Kaye’s of 1947, and none at all to James Thurber’s original creation (in which a hen-pecked husband, who inhabits a short story about five pages long, is sent out to buy overshoes and dog biscuits while his wife has her hair done).

Nor, as far as I know, did Thurber leave behind Tolkienesque appendices of the sort that might underpin the two hour roller coaster on show, a story of derring-do, adversity and high-jinks only matched by the development trajectory of this script. The Secret Life of Walter Mitty, in its decade-long passage through the hands of agents, writers, producers, studios and directors, also was dunked in the arctic ocean, shot at by Afghan warlords and abandoned in Himalayan wastelands before falling for its final release into the watchful and loving arms of Ben Stiller who found himself not only leading the cast but directing the film as well.

Usually films with this sort of midwifery are a disaster. This one’s a peach. I’m inclined to give Stiller much of the credit, though I dare say Steve Conrad’s screenplay didn’t write itself.

On a big screen, it is absolutely stunning. This is what Hollywood blockbusters should be like: imaginative, inventive, engaging, beautiful, sweeping, clever, well observed, well acted, and fun. Stiller demonstrates himself to be not just a far subtler comic than many of his peers (Jim Carey was associated with this picture at one point) but an outstanding actor: his transition from biro-pocketed nerd in the basement film archive to swashbuckling global explorer is a joy to behold, and for a little guy with sticky-outy ears, he is a surprisingly credible leading man. He has real chemistry with the ever-dependable Kirsten Wiig.

Walter Mitty is made by, features, and speaks to the people of a certain demographic: mid 40s toilers who spend their private moments aghast that their lives are slipping away unremarked-upon and their public ones putting on brave faces and avoiding the inevitable conclusion that their toils might all be for naught.

This film counsels not just seizure of the day, but also, comfortingly, that it hasn’t been in vain: the truly beautiful, as Sean Penn remarks, don’t need to show themselves off.

Ironically, Walter Mitty learns of his own beauty only when he finally flees his gilded cage. Only. Once he really has leapt from a helicopter into shark-infested water, does he realise his life hasn’t been wasted after all. (Special mention, by the way, to that Icelandic bear of a man Ólafur Darri Ólafsson, here the drunken chopper pilot, whose extraordinary performance in the recent Icelandic feature The Deep has to be seen to be believed). 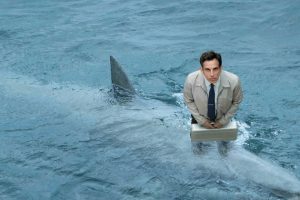 Those not old enough to have yet acquired the humility to doubt their place in the firmament may find this all a little bit self-involved, but there will a big constituency among the rest of us who will find this film hits its mark. It is relentlessly big and beautiful: Stuart Dryburgh’s sparkling cinematography deserves as big a screen as you can find to see it on, and those receptive to its message will sit there for two hours with a big, dumb grin on their faces.