Celebrating poet Dylan Thomas’s centenary year, Set Fire to The Stars was one of the highest profile films of Edinburgh International 2014 due to the attendance and involvement of Ellijah Wood. Yet to define Andy Goddard’s stylish, complex character study by the pull of one actor is a fallacy, as Set Fire To The Stars was a meditative, emotionally rich piece of cinema, which offered alternative perspectives on fame, tortured creativity and truth.

The film tells the story of literary scholar John M. Brinnin (Wood) and his debilitating relationship with poet Dylan Thomas (Celyn Jones), as Brinnin brings the literary hero to America for the first time in the 1950s. As the tagline for the film reads ‘never meet your heros’, the relationship between the characters is fittingly self – destructive, with Thomas being the un-tameable catalyst that will tear away Brinnin’s life and reputation with incomprehensible effect. The relationship between Brinnin’s growing descent from literary contemporary to an estranged baby – sitter is matched by Thomas’s aggression, fierce intelligence and personal demons. After the travesty of his first New York gig, where alcoholism threatens to both kill Thomas and ruin Brinnin’s reputation, the two shelter in Connecticut in an isolated cabin, where the two forces (if only temporally) gain an understanding of one another through confession, dialogue and poetry. 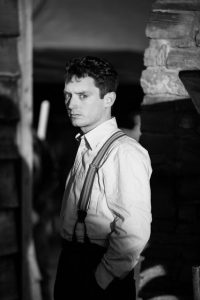 While a star supporting cast bring in memorable turns, from Steven Mckintosh’s academic pariah, to an eccentric couple played by Shirley Henderson and Kevin Eldon, the film is essentially about Wood and Jones’s understanding of one another through dialogue and powerful monologue – with Wood’s standout story of childhood cruelty as a poetic performance piece in itself. While Set Fire to the Stars is not a film that delves deep in Thomas poetry, apart from a haunting cast performance of ‘Love in the Asylum’, the film explores Wood’s characters infatuation with the idea of the poet rather than the poetry itself, touching on elements of ‘cult of personality’ and biographical voyeurism. From encounters with academic politics, the nature of creativity and a noir style underpinned by the jazz and melancholic ballads of Gruff Rhys, Set Fire To The Stars has a lot of sub textual meat, which allows the viewer to become immersed in the life of Dylan Thomas without needing too much prior knowledge of his life of poetry.

With images as stylish and tortured as the subjects themselves, Andy Goddard’s complex take on Thomas, fame and idolisation was a pleasure to behold, both introspective and intelligent and in many ways utterly devastating. While many films about ‘tortured artists’ tend to romanticise the stereotype as an appealing subcultural lifestyle, Set Fire To The Stars presents it in its most ugly form , encapsulated by Thomas and Brinnin’s dichotomous relationship of lyricism and anarchy. An incredibly surprising film, a transformative experience and an absolute triumph for everyone involved.