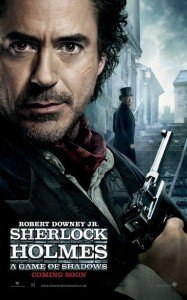 At flickfeast we are very exicted about the upcoming Sherlock Holmes: A Game Of Shadows release and to celebrate its release this Friday 16th December we’ve created a puzzle that is so dastardly it could have been penned by Professor Moriarty himself. It is truly taxing, so you’ll have to have as sharp an intellect as Holmes to solve it…

Sherlock Holmes: The Mysterious Death of the Crown Prince of Austria

It was the middle of winter. A heavy, acidic smog hung upon the city. As Inspector Lestrade looked out of a window of the Austrian Prince, Hyd Rogen’s London residence, he pondered just where had the year gone. It had flown by. He sighed heavily when he saw Holmes and Dr. Watson alight from a carriage below.

They joined him at the top of the stairs. “No need for you Holmes,this is a simple suicide case” said Lestrade. “Let me be the judge of that, Lestrade” said Holmes. “What is he doing here?” questioned Holmes as he gestured to a man cowering alone on the landing, Holmes had instantly recognised him as the eminent scientist Einstein. “I, um, haven’t done anything wrong” declared Einstein nervously.

We found this suspicious character lurking outside” said Lestrade. “Suspicious indeed” stated Holmes as he strode past and into the Crown Prince of Austria’s office.

The office was nicely furnished. There were a variety of exotic illustrations and stuffed heads of wild animals hung on the walls, a large desk upon which was a brown feather and an unusual vase filled with alliums. On the floor in front of the desk, on the parquet floor, was a calico Baltic rug upon which the Prince was sprawled out, pistol in hand, blood from a head wound mingled with the rug’s design. A jar of iodine lay spilled on the floor beside the Prince’s limp body.

“Judging from the ornaments and this chap’s tie, he was obviously well-educated and well-travelled” said Holmes. “Schooled at Oxbridge or some other important alumnus” said Watson as he tapped the Prince’s body with his cane, “no matter, a simple case of suicide it does appear”.

“My dear Watson, are you coming down with flu or inebriated perhaps? Or has the smog clouded your thinking?”
“Whatever do you mean Holmes? My eyes that smog stung, stench of it filled my nose but my mind is still crystal clear, and regarding inebriation, we both know that is more your style than mine”, retorted Watson.

“Not suicide” stated Holmes succinctly as he pointed to some deep rake-like gashes on the Prince’s temple and what appeared to be the number 10 scrawled in the spilled chemical. “This is murder, Watson, and what’s more I know who the murderer is”.

“How can you possibly know that” exclaimed Watson. Holmes simply replied “Elementary my dear Watson, elementary.”

Can you solve the puzzle and determine who the murderer was and get on our leaderboard? You can try your answers as many times as you like, your name will not be submitted to the leaderboard until you hit “Submit Score to Leaderboard” (which will only appear once you have tried an answer).

Completely baffled? Do not be disheartened as it really is a very hard puzzle after all. Feel free to get in touch to ask for a bit of guidance.