Scarlett Johansson is Laura, a predatory alien in human form travelling around Scotland, her victims are lonely men who succumb to her beauty.

The film opens with a completely black screen; slowly a dot appears and gets bigger and bigger. Abstract images give the impression of something being created, the imagery alluding to the science-fiction genre, but nothing is very clear. A mysterious man on a motorcycle retrieves a female’s body from a field and then we are transported to a strange white environment, where a naked beauty, Laura, removes the clothes from the body of the woman and puts them on. We then see her shopping for clothes like an average woman and driving around in a large white van, picking up men and taking them back to her place.

The less said about what happens the better, firstly as this is the kind of film that really benefits from going in knowing very little and secondly very little is explained and so it is very much a personal interpretation of what is happening. What can be said is the imagery is completely original and very exciting with some fascinating subtle special effects. These scenes contrast heavily with the natural realism as Laura drives around, speaking to men and going on a mesmerising journey. 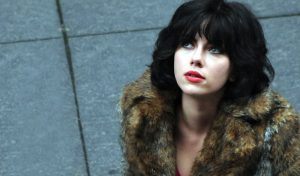 This is incredibly bold filmmaking at its very best. Seductive and intriguing, little is explained but it still somehow poetically makes sense. The atmosphere created is completely beguiling and Laura successfully seduces us, the audience, as well as the men in the film. Director Jonathan Glazer avoids clichés and instead explores the notion of seeing the world through alien eyes in a subtle way with minimal dialogue and beautiful mesmeric scenes. Johansson is extraordinary as Laura, physically far more curvaceous and her husky voice perfect for seduction. It is so refreshing to see the actress do something risqué and different from the typically Hollywood films she has opted for recently in her career. Here she appears almost cold on the outside, keeping her thoughts hidden, but brief and subtle moments and expressions reveal the tiniest of what she may be thinking. Occasionally she appears warm and human as she chats to her victims and we can almost forget who she really is.

Reminiscent of the work of Nicolas Roeg and The Man Who Fell to Earth (1976) in its tone and approach, Under the Skin could leave viewers frustrated with its lack of explanation but its expressive and visceral style will no doubt get many people excited. The music, by Mica Levi, is exceptionally striking, recurring throughout the film as Laura draws another victim in; it is both haunting and seductive and remains with you after the film has finished.  Visually the film is stunning with a juxtaposition of black and white throughout, the film opening with black and ending with a striking white, visually depicting the themes of difference and opposites (alien/human, male/female).  The issue of predation also becomes an interesting theme explored within the film.

Under the Skin does leave questions and really feels like it demands a second viewing instantly, but this isn’t a negative thing and instead demonstrates the multi-layered narrative and artistic approach that requires time and consideration to truly appreciate.

A mysterious and seductive film with Scarlet Johansson at her very best once again. Under the Skin is an enigmatic and impressionistic experience that will hypnotise those that choose to let it.