Snowpiercer has been a long time coming. Film fans heard about it some time ago, and the trailer seemed to please most people. Then there was talk of studio interference ahead of the movie getting a release in America. Because Americans couldn’t handle the version of the film that played elsewhere, apparently. Thankfully, that interference was reversed, and now film fans can enjoy Snowpiercer as director Joon-Ho Bong intended.

Based on a French graphic novel, this is a sci-fi drama, with a couple of decent action set-pieces in the first half. The world has frozen over and everything has died off. The only living creatures are on board the Snowpiercer, a large train that travels around the world constantly, thanks to the non-stop work of the glorious engine that keeps everything running as it should. Everything in the train has a specific place, even the people. But that’s about to change, hopefully, as a brave young man (Curtis, played by Chris Evans) stirs people into action with a plan that may see them move from one end of the train to the other.

Adapted into movie form by Kelly Masterson and Bong, Snowpiercer is a film that constantly veers between the cliched and the pleasantly surprising. Much like the train itself, the whole thing seems designed to keep everyone moving along nicely from start to finish. The effects aren’t always up to the standard required, the twists and turns aren’t all that unpredictable, and the entire premise seems too simple to be stretched out for two hours. Yet it works, and works brilliantly. 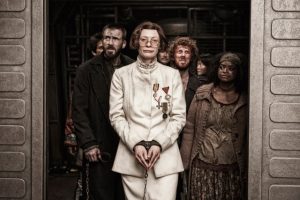 The cast help to sell it, with Evans once again proving that he’s more than just a Marvel moneymaker. Jamie Bell, John Hurt, Ed Harris, Luke Pasqualino and Ewen Bremner all do good work as different train inhabitants, Octavia Spencer is easy to root for as a mother looking to reclaim her child, and Alison Pill and Tilda Swinton provide surprisingly big laughs as two authority figures caught up in the rebellion. Kang-Ho Song and Ah-Sung Ko are the two people who are most valuable to the rebels, able to get through the main doors that bar the way to the front of the train, and both give performances that are amusing, cool and always interesting.

Bong paces the movie perfectly, interspersing the main storyline with either upsetting revelations for the main characters to digest or fun little details that help to make the onscreen environment a more realistic one. There are also a few fantastic set-pieces, mixing tension with gore, and the unique setting that plays into the action.

Some viewers may be put off by the lack of subtlety. The train is really the worst of humanity all packed into one contraption. Few of the main characters have any extra shading to them, beyond the obvious good or bad placement, and the revelations start to become more inevitable than actually revelatory after the first couple of scenes. It doesn’t really matter though. While there are elements in the movie that will make you think about human nature, and the class structure, the whole thing is geared towards entertaining viewers, first and foremost. And it succeeds admirably.