Confidently evoking and eschewing British prison drama cliché, David Mackenzie’s Starred Up is a fascinating exploration of physical performance and aggression, his actors wielding their bodies like sculpted and emotive weapons – gladiators and savage models, they are native to pure, silent movie storytelling.

Mackenzie has made several films about troubled young men (2007’s blackly comic Hallam Foe, about a morbid teen who wanders Edinburgh’s skyline following his mother’s death, and 2009’s Spread, starring Ashton Kutcher as a shallow serial womanizer), but none have prowled the male psyche so radically as Starred Up, whose pitilessly bleak vision of prison, its hierarchy and violent code of honour, is rooted in worryingly present ideas of masculine crisis. 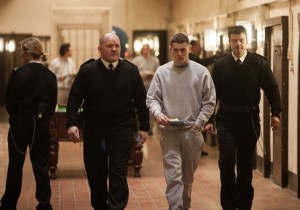 Its title refers to the circumstance whereby young, violent offenders are transferred to adult prison, as is the case for Tom O’Connell’s Eric. Eric’s braggadocios behaviour is obviously rooted in deep personal trauma, but the story reaches him at a point where the cause has escaped the effect, and violence has become more like a language. His frame can be imposing and firm, almost samurai-like in its stillness and sculpture, its entwinement with an (im)moral code, but it can also be fragile, the tension held in his shoulders revealing more than a close-up on the actors eyes ever could (though they too are a penetrating tool in his arsenal; O’Connell grows more impressive by the year). 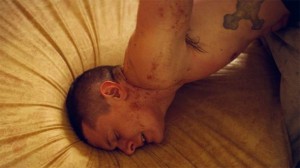 Eric’s new lodgings also accommodate his father, an intimidating and respected presence on the prison’s top floor, and initially the pair meet at loggerheads – if their first encounter is a cautionary bow (again indicating an almost warrior-like sense of tradition) their second is a duel of boastful and firebrand gestures, each man planting his stakes in the ground. Their unresolved issues form the dramatic crux of Starred Up, and as Eric’s father Nev, Ben Mendelsohn turns in a powerhouse performance, his trademark intensity never slipping as it so easily could into villainous caricature.

Mackenzie’s stark aesthetic could just as easily slip into cold, Hunger-esque austerity, but instead his use of soft-focus and primary colours (claret, black-hued blood on piss-yellow walls) imbue the film with an unexpected poetry. His shaky-cam finds a different register depending on the scene; in moments of violence it is aggressively unhinged, almost vérité, but gentler and more dramatic scenes have a wooziness which is suddenly intoxicating. 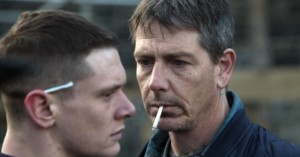 So too does the film fall into an arrestingly regular rhythm, following the daily routine of prison life and commanding a consciousness of time’s unstoppable slip –  it is clear from the off that Nev will die in prison, and if he doesn’t rehabilitate Eric will face the same fate, so this temporal trickle is imbued with a strong sense of melancholy. As the prison becomes increasingly claustrophobic (ironically, as Eric navigates its gangways and expands his network) Mackenzie ups the pace to choking point, and a third act series of twists, while convoluted, are among the most visceral I’ve seen in a cinema this year – those expecting the film to slack off and find a neat resolution will be pleasantly surprised by its dedication to grime and misery, which is after all an English tradition.

This is clearly Mackenzie’s aesthetic triumph, and his best film since 2003’s brilliant Young Adam, but O’Connell and Mendelsohn’s performances will be all that linger in the mind. Their physicality is astonishing to behold, the malleable structure of their bodies hypnotic, carrying the quality of a silent movie spectacle – Nev like the titular character of the expressionist masterwork Der Golem, and Eric like a loose-limbed but brutal comic. The film is defined by movement, masculine shapes brushing together and bristling, slipping in and out of their cages like lions. 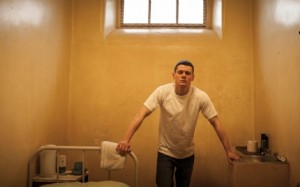 I entered Starred Up weary and cynical… another angry young man prison drama? Really? Mackenzie’s film is much more – a tale of masculinity in crisis, threatened paternally and environmentally, it finds deeper roots to an English ‘type’ than many films of its ilk in living memory, and is bolstered by two fascinating, physically dextrous leading men. Bold and disturbing, it’s one of the best British films of the year.