As David Lynch explored in Mullholland Drive (2001) the entertainment industry is a fickle machine and for every star with their name etched in marble thousands more are engulfed into the psychological cess –pit of false promises, exploitation and homogenization. Taking this oft – told tale of a struggling actress chasing her big break and giving it a juicy psychodrama / body – horror spin, Starry Eyes is an incredible flick from directors Kevin Kolsch and Dennis Widmyer exploring the nightmarish underbelly of  Hollywood and the lengths individuals will go for their own slice of legacy.

The plot focuses upon Sarah (Alex Essoe) as a sweet young hopeful, slumming it at a Hooters type bar under Cheap Thrills Pat Healy’s sleazy manager and living with a rag –tag bunch of cynical Hollywood fringe dwellers, who belie and mock her attempts at stardom. After being invited to a mysterious audition for long established studio Astraeus Pictures and believing she has fluffed it she retreats to the toilet where her pent – up frustration is relieved in a series of tortured screams accompanied by pulling out large clumps of hair. Having accidentally witnessed the scene an Astraeus casting director sees potential in the young actress, leading her on a frightening rite of passage to stardom via body horror transformation. While most Faustian pacts deliver rewards first and penance later, Sarah’s physical and psychological transformation involves a severe degradation in the style of classic Cronenberg and Maria de Van’s In My Skin (2002). 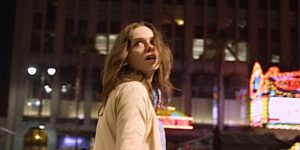 With a cast assembled from recent annals of controversial horror such as Amanda Fuller (Red White and Blue), Noah Segan (Deadgirl) and a sinister turn from ‘the producer’ Louis Dezseran, Starry Eyes’s satire bites sharply, with Sarah’s transformation in many ways reflecting the delusion, dependency and aggression of the many hopefuls who flock to LA only to become delusional and consumed by its drug culture. This dichotomy between dreams, reality and sacrifice is also further heightened by Jonathan Snipes 80s- style- synth – pop score nailing the films satiric tone at the right moments, alongside the films transition from color and optimism to darkness and corruption as Sarah transforms from fragile sweetheart to subhuman psycho. As a perfect slow – burner the films violence all happens in a mental third act, with a chilling ending bathed in an aesthetic celebration of the ‘Golden Age’ of Hollywood artificiality.

While the film on paper reads like standard body horror fare, the film is expertly realized in everything from its performances and effects work to its score and satiric themes. Having interviewed directors Kolsch and Widmyer at Frightfest speaking to them about their experiences in the industry, it is apparent that Starry Eyes is a smart, stylish middle finger from independent filmmakers to the classic studio system which embodies the old Hollywood anecdote ‘film is a collaborative process … bend over’.  A sublime thought provoking genre exercise and one of my favourites of the festival.