Hundreds, nay millions, of people upload their videos to Youtube everyday.  For some, what was a pastime grew into an unexpected career while others have gained nothing but notoriety.  So, for a small internet series – once lauded as the ‘best series on the net’ by NME – to evolve from a cult online success into a feature-length film, which had its premiere at the 2013 Edinburgh Film Festival, you know you’re onto a winner.

Svengali is the lovechild of the multitalented comedian, musician and writer Jonny Owen, who stars the enthusiastic Dixie, a postman and aspiring band manager from South Wales.  After trawling through the internet to find ‘the next big band’, he travels to London with his girlfriend Shell (This is England’s Vicky McClure) to make the band – ‘The Premature Congratulations’ – into music’s newest ‘superstars’.  But the road to success never runs smoothly and with egos, money problems and dabbling acquaintances in the mix, Dixie soon has to decide between the biggest passions in his life: Shell and music.

Given its origins, the story is simple to follow though there is plenty for sceptics to comment on.  A small-town boy travels to the big city to find success? It sounds like the classic underdog story – a concept that has been adapted many times, and on the most part, it is a predictable premise and it is unlikely to stand out amongst its box-office blockbuster peers, or in this case, the dramatic heavyweights of British cinema. 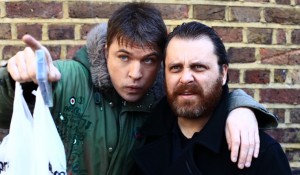 However, it is in this respect where Svengali shines.

The film is full of heart, thanks to the doe-eyed innocence of Dixie.  With nothing to his name but his enthusiasm and his ‘golden ears’, he manages to charm the hard-hearted folks in London town without being a monumental jackass – through his lovability and genuine love of music, he ironically embodies all the traits that his ‘established’ peers in the music industry don’t have.  McClure plays the long-suffering Shell, who is as charming as she is feisty, showing a different side to the actress when compared to the hard-hearted Lol from Shane Meadows’ This is England.  The chemistry between her and Owen easily outshines the film’s supporting cast, such as Roger Evans as Dixie’s douchey friend Horsey and Martin Freeman as disgruntled shopkeeper to Matt Berry and Morwenna Bank’s frankly weird record company bosses.

Director Hardwick’s experience in directing British entertainment adds substance to Svengali’s already complimentary bow, but the film is essentially a vehicle for Owen.  In addition to his comedic capabilities and his flair in creating a great jukebox soundtrack, his talent in screenwriting shines through and by avoiding the clichés of an underdog story, he gives Svengali an unprecedented edge over similar light-hearted comedies. 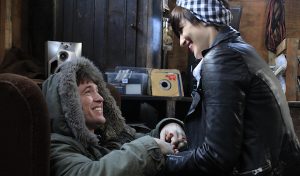 Svengali is simplistic in nature but overall sweet and charming, providing a lighter change after the heavy-duty dramas of awards season 2014.

Svengali is out in UK cinemas on Friday 21st March.