The Congress shot itself in the foot. It’s all I can say, really. All the elements of a daring examination of self-identity in a technological future were right there in front of it and then BANG. Blood everywhere. Those trainers are ruined. Its fatal mistake? Ari Folman’s bizarre assumption that its audience are total dum-dums incapable of interpreting basic metaphor. Which is a weird choice considering Folman’s audience are without a doubt the exact kind of people who want to spend the half hour after the film ends drinking soy lattes and arguing so passionately about interpretation that everyone else in the joint assumes they’re breaking up or something. Which maybe they are. I’d like to know how many relationships were ended over whether the totem stopped spinning in Inception. Yet here, everything is laid out on the table and your relationship remains stable.

Which is a real shame as there are certainly moments of soaring brilliance contained within The Congress. Folman takes his inspiration, Stanislaw Lem’s The Futurological Congress, in which a man is faced with a future reality where the world is experience only through the illusions produced by hallucinatory drugs, and develops its ideas to their fullest extent. Through the same stunning animation work seen in his previous effort Waltz with Bashir, Folman’s interpretation of this hallucinatory world of tomorrow is no short of jaw-dropping. Roger Rabbit’s ToonTown makes polite conversation with a New York restaurant’s caricature-filled walls, as the population are granted through these drugs the ability to transform themselves into their wildest fantasies. Be absolutely prepared for a cavalcade of 2D cameos that will make you snigger at moments that feel completely inappropriate. In the centre of it all is Robin Wright, playing a fictional version of herself faced with a future in which technology drives the self to be irrelevant. A future where Wright can have her body and her emotions scanned by computers to create a younger, fresher CGI model who does the entire weary job of acting for her, leaving her to battle with her own purposelessness. 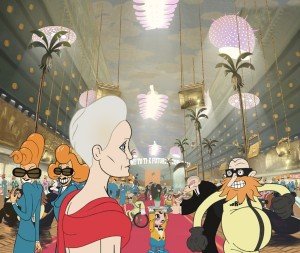 However, Folman fodders these strong thematic concepts with painfully self referential dialogue, thus instantly deconstructing any sense of metaphorical mystery. The opening scenes in which Wright sells her digital image to a studio called Miramont (GETTIT, BECAUSE IT SOUNDS LIKE PARAMOUNT. GIMME OSCAR) are borderline cringe worthy in their barefaced satire of Hollywood politics. There’s speech upon speech on the way the industry tosses to the side older actresses; Wright is either referred to as her Princess Bride character Buttercup or through her “lousy choices. Lousy movies. Lousy men”, which I’m sure is meant to be nudge towards her troubled relationship with Sean Penn. And if that wasn’t enough, there is the constant discussion of Wright’s refusal to star in a sci-fi movie as she views it as a “dumb genre”. Which is meant to be all kinds of ironic considering The Congress‘ own pedigree. I GET IT. IT’S IRONIC. GIMME OSCAR. The level of self-referential asides is the kind of stunt actors pull on Jimmy Kimmel to prove their own humility; it just feels out of place with something as thoughtful as Folman’s film-making.

The dialogue of The Congress is simply not cutthroat enough to work as the satire it desires to be and ends up completely deconstructing any subtlety it tries to build in its twisted hallucinogenic animations. It all ends up feeling a little bit like a lecture, the furiously sarcastic ones you receive when drunk strangers corner you at a house party. The ones with all those air quotes. It’s clear that Folman is an extremely talented filmmaker, but The Congress goes to prove that he’s in desperate need of a good script editor. Any volunteers? 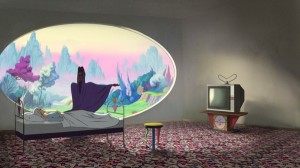 p.s. This might entirely be worth a watch though simply because Jon Hamm voices a character who looks exactly like Tulio from The Road to El Dorado. Can someone please confirm this for me and also enter into discussion of how great a movie El Dorado was?