It should be a requirement that in all screenings of Terry Gilliam’s movies, the film in question should be shown two or three times in succession. Brazil, Twelve Monkeys, and now The Zero Theorem: all beg an immediate re-watch to try and catch-up on all things you missed in round one. Gilliam is relentless and unapologetic as a filmmaker, throwing out visual jokes and philosophical musings at an alarming rate that’s pretty much impossible to keep up with. Which is where I made a major mistake for around the first half of the film: my brain whirring like an over-heated machine, connecting significant moments, trying to “get” the movie.

In that mind frame, I’ll admit The Zero Theorem can feel a little messy or jumbled on first viewing. Gilliam poses a heck of a lot of questions but it’s hard to feel like he cohesively answers any of them. Qohen (Christoph Waltz) is desperate to work from home on blind faith that he’ll one day receive a phone call that tells him the meaning of life. It’s clear that Gilliam is critiquing technology as the new religion, considering Qohen holes himself up in an abandoned Church to work on the mysterious Zero Theorem project, but at the same it is in the virtual world that Qohen finds his freedom with the charming call girl Bainsley (Mélanie Thierry). One would assume that something referred to as The Management would be the faceless terror of a 1984-style dystopia, considering his security cameras are bugged in ever corner of Qohen’s house, yet he’s played by one of the most affable actors in Hollywood (Mr. Matt Damon) and, in his defence, is giving Qohen exactly what he wants when letting him work on the Zero Theorem in his own home. He even arguably shows interest in helping Qohen when sending Bainsley and his own computer-whiz son (Lucas Hedges) to prevent his self-imprisonment from driving him totally mad. 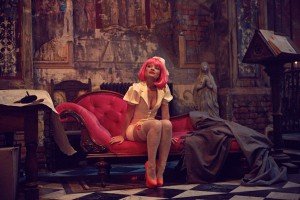 However, why would I criticise The Zero Theorem for asking questions that are interesting and complex enough not to be wrapped up by the final reel? Why is there a need to “get” a movie? I think David Lynch would certainly disagree. If a film affects you emotionally, whether that be joy, fear, or sorrow, then it has done its job. Gilliam is asking these questions to the world precisely because he does not know the answer to them, because he doesn’t know how a technology-obsessed and bureaucratic future will effect us as a society. If it’s not perfectly logical or linear, it’s only because life itself isn’t those things either. Gilliam wishes merely to explore as an adventurer into his own unknown, and to give is a hell of a ride along the way.

And boy, is The Zero Theorem an enjoyable watch. The few scenes that take place outside of Qohen’s refuge are a suffocating vision of the future: the colour within these scenes is almost overwhelming and the chirping voices of adverts literally follow you down the street in a deafening screech. In usual Gilliam fare, there’s plenty of jokes at the expense of our crass, capitalistic culture: from parties inhabited by soulless people staring into their iPad screens to singing pizza boxes. Inside the refuge we’re treated to another stellar performance from the perpetually charismatic Christoph Waltz as the melancholic and oppressed Qohen, who shies away from human touch and refers to himself only in the royal “we”. 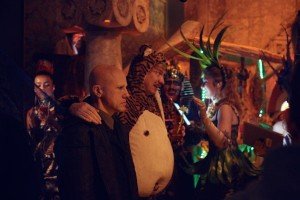 Gilliam has once again crafted a universe we lose ourselves in, filled with the contradictions, with the light and with the dark that marks the human condition. Watch it. And then watch it again. And then possibly again.