The sci-fi Luddite movie Transcendence is a disappointment on many levels, its dialogue trite, its action sluggish, its imagination falling short of its ambition. It’s all pretty forgettable, and in a way maybe that’s just as well. Who wants to remember Johnny Depp masterminding the universe? At times he gets to literally phone in his dull performance, but there’s way too much of it, on too many screens within the screen.

It’s a pity this movie is so conventional and muddled, because it revolves around a genuine concern: man’s growing subservience to his own machines, which Thoreau already foresaw in Walden when he famously declared that “men have become the tools of their tools.” The ultimate tools-of-their-tools experience surely will be for humans to turn over control to robots. Transcendence does delve a bit into scientific and ethical issues surrounding this worry. If a robotic brain is genius level and also has emotions and, whatever that is, a soul, it asks, what then? The film sees the Internet as the fatal added ingredient, allowing grandiose artificial intelligence to metastasize into a godlike universal master brain quickly taking over all humans and all nature, for their greater good, of course. Wow! 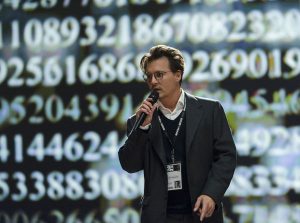 But this is too much for one movie, and it’s dragged down by the aforementioned silly dialogue and a conventional blockbuster plotline leading up to bombs and shootouts. It’s further brought down by the pathetic effort to “humanise” the drama with a corny young adult novel-level romance of scientist wife Evelyn (Rebecca Hall) and cyber-tech mastermind husband Dr. Will Castor (Depp).

The movie has elements that would please its producer if not overall mastermind, Christopher Nolan of the recent Batman films and Inception. It’s Nolan who hired his usual cinematographer Wally Pfister to debut as director this time. We observe Nolan-esque tastes in the prevalence of glossy CGI for manifold computer screens and glorious banks and hallways of shimmering cyber stuff. The movie folds in elements fromFrankenstein too, and sometimes makes you think of Fifties sci-fi. It’s also apocalyptic from the get-go, opening with shots that show the plug was pulled on much of modern life a while back. One town has electricity, another cell phone reception, but mostly the planet is back to pre-industrial times — or something; no time to explain in detail. The film begins in Berkeley, but at no point does Pfister achieve a vivid sense of place.

Evelyn doesn’t want to lose Will after a member of a violent Luddite group shoots him with a radioactive bullet that is going to kill him. It’s a favorite Hollywood theme, now more than ever: the fantasy of “what if” we could save our lost loved ones, bringing them back somehow after they die. This time, before Will passes away, which conveniently takes several weeks, Evelyn arranges to have his brain downloaded to computers via some program that will keep it alive and functioning on its own, a scheme he’d already successfully executed on a monkey’s brain. It’s a scary success. The new AI Will, if it’s really Will, is not only superhumanly smart, but superhumanly ambitious, wanting to fix everything wrong with the planet and needing to take over everything to do so, including creating a network of manipulated super-humans. He’s also morphed into a kind of Big Brother, and also a nosy over-intrusive husband who begins to alienate Evelyn (these moments recall Spike Jonze’s recent Her). This stuff just ain’t right, and Paul Bettany, Cillian Murphy, and Morgan Freeman scurry around with numerous extras, including assorted members of the Luddite guerrilla mob headed by Kate Mara (“Bree”), trying to stop it. 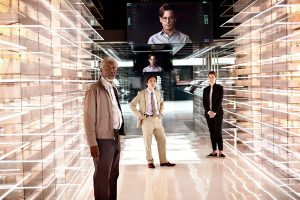 To carry out his scheme of world domination and “improvement,” the new Will, whose first act is to make a bundle on Wall Street, directs Evelyn to buy up a desolate town in the desert called Brightwood, sort of like Marfa before Donald Judd took it over. This town is an appealing concept, a mix of something out of the “Jericho” TV series and an old Western. Alas, the movie’s scenes using its desert town, local characters, and cyber-research facility with banks and banks of solar power cells lack any flair. They are clumsy and repetitions. They begin to bore us even before the movie devolves into a numbing series of generic blockbuster actioner scenes. Avoid.

Transcendence is in cinemas 25th April 2014.

Cannes 2017: A Stairway To Cinematic Paradise