Ah, the life of a park ranger. It’s a pretty sweet deal, right? All Ranger Smith had to do was walk around Jellystone Park and stop Yogi Bear and Boo-Boo from stealing picnic baskets.

But not every park is like Jellystone Park. Virunga is a national park in eastern Congo, and there the rangers have to deal with poachers and people involved in a running war. It’s dangerous at all times, and guards such as Rodrigue Mugaruka stay vigilant and armed. In a main station nearby, Andre Bauma helps to look after orphaned mountain gorillas while Dr. Emmanuel de Merode tries to plan ahead, to keep both Rodrigue and Andre safe from any major conflict that may break out nearby and spill over onto their land. Meanwhile, a young journalist, Melanie Gouby, decides to do a bit of spying. All of these people have one thing in common – they mistrust SOCO, an international oil and gas exploration and production company who are looking to gain access to Virunga and make lots of money. Their planned work is not entirely legal according to the people discussing events onscreen, but they have some pretty determined people working for them who use not-entirely-legal methods to get results. SOCO, of course, refute such accusations, but there is compelling evidence caught here on camera. Enough to make any big money-maker change their ways though? Well, the chance to make lots of money is rarely something that people move away from. 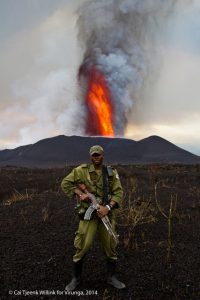 Virunga is quite an eye-opener, in so many ways. From the opening scenes, offering a very brief, potted history of the Congo area, through some moments showing the effects of poachers, to the final statements regarding the situation as it stands just now, nothing here is ever less than shocking and/or appalling when it comes to the ways in which the land and animals are disrespected by those looking for financial gain. Yet there are also moments of hope, light in the darkness. The people protecting Virunga do so with, it would seem, the noblest of intentions. And any scenes showing Andre Bauma engaging with the gorillas that he refers to as his second family are sweet, a welcome break from the rest of the tension and potential violence seemingly hovering at the very edge of the screen.

The only real problem I had with this documentary was the investigative reporting by Melanie Gouby. She clearly means well, and puts herself in a number of risky situations in order to expose some people who work for, or are sub-contracted by others acting in the interests of, SOCO. Yet, sadly, it always feels as if she’s just playing at being a brave woman. She’s, almost literally, a little girl playing dress up while events grow increasingly dangerous around her. Apologies to Miss Gouby if that sounds too harsh, it’s just the way it felt throughout the documentary.

No matter what you think of any individual scenes/moments, Virunga is much more than the sum of its parts. Orlando von Einsiedel has fashioned a powerful, effective documentary that doesn’t just show a bad situation people should look at and then forget about. It calls for change, and rightly so. Look further into what you can do by visiting virungamovie.com here.