After more than a decade, Godfrey Reggio returns to write and direct for the big screen once more. Following on from the overwhelming success of his visually and auditorily experimental Qatsi film trilogy (now thirty years old, and still as poignant as it was upon its release), his latest offering Visitors is perhaps both more complex and more simple, penetrating the core of the human soul in its contemporary condition.

Stunningly shot in black and white digital 4K projection, the film comprises only seventy-four shots, and is made up mainly of slow-motion film portraits ranging from children to the elderly. Its purpose: to force the viewer to confront themselves and how they interact with technology, and with one another, in the modern age. 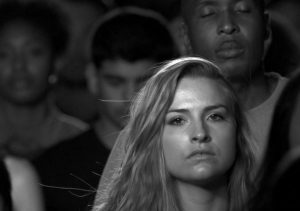 Taking much of its premise from the original Qatsi films, Visitors digs deeper into the human condition. Confronted initially with the film portrait of a gorilla, its eyes filled with compassion, Reggio then confronts his audience with sequence upon sequence of adults watching television, children playing video games, and crowds of commuters with their stony faces ploughing on.

In these contrasting scenes, the unseen television programs and video games seem to elicit a moderately greater emotional reaction than the scenes in which these people are captured moving together, walking together, traveling together. Despite the apparent unity and community of the scene, no two people acknowledge one another, there is little expression on any face, and there is certainly no interaction between them.

Reggio’s acute vision of post-modernity lies in his understanding of heterotopia. A principle introduced by Foucault, it defines a dystopia which is only completed by the inhabitants’ own recognition of it.

As we watch these children and adults, men and women, humans and animals engage with, and, incidentally, disengage with the screen in front of them, the audience develops a heightened awareness of itself as just another face watching just another screen. We become aware of our responses, aware of our emotional apathy, and aware of the way we feel about what we’re seeing – a trait that is so uncommon in contemporary cinema.

Reggio’s notion of heterotopia is self-reflexive. By placing a screen in front of his subjects and filming their reactions, he forces his audience to watch the film as though it is watching itself. Through watching this film, we travel through the looking glass, completing the dystopian vision of contemporary society, in which only a select few seem to have retained the capacity to experience an emotional response to the things they witness.

This kind of self-awareness is both profoundly moving and profoundly disturbing – resulting in the kind of epiphany that so many recognised from Reggio’s Qatsi trilogy. As Wolfgang Iser suggests that the reader completes the work of literature, Reggio’s audience completes the message, the essence, and the philosophy of his film.

Visitors, in this respect, certainly rivals the vision of Reggio’s most renowned film Koyaanisqatsi. We are forced to recognise ourselves as the people we witness throughout the film, the ones who have become desensitised to the real world by the screens that we are bludgeoned with on a daily basis. When, in the final shot, the audience is confronted once again by the film portrait of the gorilla, it seems that there is more emotion and compassion to be found in its eyes than in any human that the audience has experienced throughout the film.

In a contemporary context of action movies, with technology at our fingertips, the fast pace of life and the diminishing culture of human interaction dictating our own demise, the veritable stasis which characterises Reggio’s film is strangely cathartic and re-sensitising.

The endless readings and interpretations that Reggio’s films inevitably provoke will stir any Visitors audience. With another stunning score from Phillip Glass, Reggio’s dialogue-less film ultimately forces you to create a dialogue yourself – to engage, to interact with, to attempt to understand the portraits that you come face to face with. Every dialogue will be different, and with this realisation it is possible to conclude that Reggio himself has arrived, once again, to deliver the very antidote for the mundanity of contemporary human existence with a haunting cinematic masterpiece.