Win tickets to Legend of the Guardians Premiere 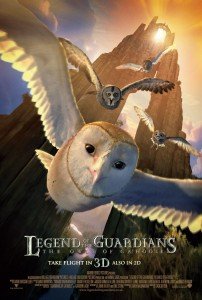 Fancy swanning it down the red carpet this weekend at the premiere of the fantastic Legend of The Guardians in 3D? With a voice cast featuring, amongst others, Helen Mirren, Geoffrey Rush, Jim Sturgess and Hugo Weaving we bet you do! Well, courtsey of Warner Bros, we have four tickets to giveaway to one of you lucky readers so that you can take along all of the family!

The premiere is this Sunday 10th october at the Odeon West End (doors open 16:15, seats 17:00). To be in with a chance of winning these great tickets all you have to do is wing your flickfeast username over to us in an email with the Subject “LOTG Premiere Comp” to [email protected]…

The competition closes on Saturday 9th October 2010 at 12:00 and you must also be registered on the site so if you’re not already please register (it’s free)! This competition is open to the UK only. The winner will be picked at random from entries received and notified by email on Saturday afternoon.

More about the film…

While Soren dreams of someday joining his heroes, his older brother, Kludd (RYAN KWANTEN), scoffs at the notion, and yearns to hunt, fly and steal his father’s favour from his younger sibling. But Kludd’s jealousy has terrible consequences—causing both owlets to fall from their treetop home and right into the talons of the Pure Ones. Now it is up to Soren to make a daring escape with the help of other brave young owls. Together they soar across the sea and through the mist to find the Great Tree, home of the legendary Guardians—Soren’s only hope of defeating the Pure Ones and saving the owl kingdoms.

Snyder directed Legend of the Guardians: The Owls of Ga’Hoole from a screenplay by John Orloff and Emil Stern, based on the Guardians of Ga’Hoole novels by Kathryn Lasky.  The film was produced by Zareh Nalbandian, with Donald De Line, Deborah Snyder, Lionel Wigram, Chris deFaria, Kathryn Lasky and Bruce Berman serving as executive producers.

Legend of the Guardians will be released in the UK and Ireland on 22nd October 2010.

THIS COMPETITION IS NOW CLOSED