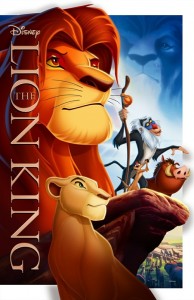 For the first time, the jewel in Disney’s animated crown, The Lion King, has been brought to life like never before and will debut to a new generation of fans, in dazzling 3D, at Edinburgh’s beautiful Festival Theatre on 25th June 2011, allowing the audience to enjoy this critically acclaimed and universally beloved classic like never before, ahead of its general release on 14th October.

An unforgettable story, breathtaking animation, beloved characters and award-winning music set the stage for the adventures of Simba, the feisty lion cub who “just can’t wait to be king.” But his envious Uncle Scar has plans for his own ascent to the throne, and he forces Simba’s exile from the kingdom. Alone and adrift, Simba soon joins the escapades of a hilarious meerkat named Timon and his warm-hearted warthog pal, Pumbaa. Adopting their carefree lifestyle of “Hakuna Matata,” Simba ignores his real responsibilities until he realises his destiny and returns to the Pride Lands to claim his place in the “Circle of Life.”