Win tickets to the premiere of The Last Seven 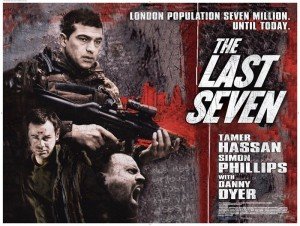 THE LAST SEVEN is a post-apocalyptic thriller starring Danny Dyer and Tamer Hassan, who are re-united on the big screen for the first time since Brit-gangster hit DEAD MAN RUNNING.
THE LAST SEVEN sees  London deserted. Only 7 people remain, their memories erased, and soon they discover that survival against the toughest odds imaginable is the only chance of escape.

We have two pairs of tickets to the film’s UK premiere to give away. The premiere will be held in a central London location on Tuesday 24th August, at 7pm. To enter all you have to do is email the answer to the following question to [email protected]
Which film did Danny Dyer and Tamer Hassan star in together before The Last Seven?

Competition Rules: You most be over 18 to enter and be able to make the premiere. The competition closes on Monday 23rd August at 12:00 and you must also be registered on the site so if you’re not already please register (it’s free)!

The film is released theatrically on 27th August. For more info on the film check out its official website http://www.thelastseven.co.uk/

THIS COMPETITION HAS NOW CLOSED