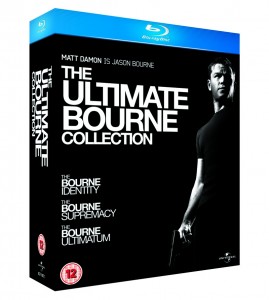 To celebrate Universal’s 100th anniversary, we are giving 3 people the chance to win their own copy of the thrilling Jason Bourne series with The Ultimate Bourne Collection Box set, available now.

Relive the action-packed adventures of Jason Bourne as he searches to uncover the truth about his identity and goes on a dramatic journey to discover one of cinema’s greatest conspiracy theories.

All three explosive films, The Bourne Identity, The Bourne Supremacy and The Bourne Ultimatum, are included in the trilogy box set released by Universal Pictures (UK).

Competition Rules:
* flickfeast is the promoter of the competition
* Competition is open to UK residents only
* The winners will be picked at random and contacted by flickfeast.
* The Editor’s decision is final and binding on the entrants. No correspondence will be entered into.
* Closing date is 20th August 2012. The winners will be notified by email and must respond within a week otherwise the prize will be given to someone else.
* The prizes can take a couple of months to reach the winners
* You must be registered on the site to enter so if you’re not already please register (it’s free)