NB: This review is of the original Japanese version, rather than the English language dubbed version.

In the world of animation, Hayao Miyazaki is a legend.  His fantastical vision has brought us unique gems such as Totoro, forest kodamas and the robots of Laputa, with his simplicity in style making him an icon for generations.  Now, almost 30 years since Nausicaä of the Valley of the Wind, his first film with Studio Ghibli, Miyazaki ends his celebrated career with a ‘homage’ to one of Japan’s most celebrated aerodynamic designers.

The Wind Rises is based on the life of Japanese engineer Jiro Horikoshi and his struggles to create the ‘perfect’ plane, which span through life, love and loss.  Starting from his youth when his eyesight prevents him from becoming a pilot, his imagination leads him to working for Mitsubishi as an aerospace engineer and the conception of the celebrated A6M Zero Fighter Plane. 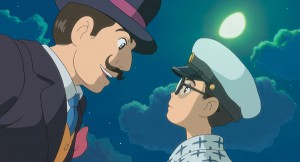 In terms of otherworldly elements that make Miyazaki so different, these are kept to a minimum.  Creative snippets mainly come in the form of Jiro’s dream sequences, featuring Italian plane designer Giovanni Caprioni that subsequently feed his imagination, as well as gives an insight to the two characters’ shared ambition to make beautiful aircrafts.  Regardless of this, The Wind Rises takes the mature route and like Grave of the Fireflies, concentrates on the real-life themes of death, personal struggle and life during war so do not expect huge robots, monsters or strange creatures in secluded woodlands – any magic here takes place in the air.

With this maturity comes an emotive aspect.  Not only does the film capture Jiro’s difficulties in his professional career, but it also expresses his quiet personality and his devotion to everything around him.  His tender yet short-lived romance with Naoko, a girl whom he had saved from an earthquake in his earlier years only to be reunited in a chance encounter, provides a much-needed escape to Jiro’s technical mechanics that dominate the film even though it brings a tear or two. 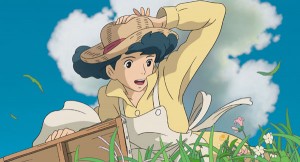 However, this is Studio Ghibli and Miyazaki, so in terms of animation, it is second to none.  Stunning in its simplicity and beautiful to watch, yet the animation’s ability to capture sequences depending on the speed and motion of the scene is captivating.  Miyazaki brings in the emotion of his scenery and it is hard not to be moved by scenes such as the aftermath of the Great Kanto earthquake that destroyed Tokyo and its surroundings in 1923, or even the featured aerodynamic demonstrations where Jiro’s dreams become a reality.

The Wind Rises is gorgeous filmmaking from one of the greatest animators of all time.  Through his own celebration of a creative genius, Miyazaki’s career ends on a high.

The Wind Rises is out in UK cinemas on Friday 9th May.