In 2004, Bryan Singer was in the middle of negotiating a deal to complete his acclaimed X-Men trilogy.  When he abandoned the project to direct a new Superman film, there was a feeling of disappointment as fans wouldn’t see Singer’s final instalment in what could have been a great trilogy of comic book film.  Now, ten years later, he makes his long-overdue return to the film series.

X-Men: Days of Future Past begins in the year 2023, where mutants are being hunted down by robots known as Sentinels.  Professor X (Patrick Stewart) and Magneto (Ian McKellen) send Wolverine’s (Hugh Jackman) consciousness into the past to stop Mystique (Jennifer Lawrence in an extended role) from killing Bolivar Trask (Peter Dinklage), in order to prevent the Sentinel program and thus saving mutantkind.  However, Wolverine has to bring together the deeply depressed and essentially powerless Charles Xavier (James McAvoy) and the imprisoned yet still-hateful Magneto (Michael Fassbender) to save the future.

Since Singer’s departure from the series, the X-Men films have been, lack of a better word, lacklustre.  After X2, the pretty disappointing X-Men: The Last Stand and numerous spinoffs have failed to match the benchmark he had set in his films.  It initially appeared that his efforts in creating what was the first modern comic book film had gone to waste until Matthew Vaughn and Jane Goldman managed to revive what was perceived as a dying franchise, by planting the roots for a new trilogy in 2011.

Even though the film wins points on its faithfulness to the 1981 comic book, the idea of bringing together the new cast members with those from the original films brings up the problem of screen time.   For instance, former students (Iceman, Shadowcat and Colossus) and old favourites (Storm, Professor X, Magneto and Wolverine) make an appearance in Days of Future Past. They collectively resemble what already is an extended cast and that doesn’t even include the next generation of characters, most of whom are making their first appearance in the film.  It is a shame that certain actors were demoted to a cameo appearance and with most of the attention focused on a core group of characters, it is like doing backup vocals to a band of lead singers. 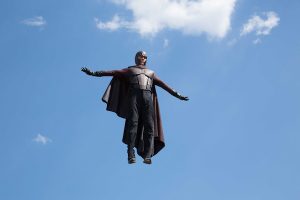 However, Singer’s return to the franchise proves that he can still make a decent comic book film.  The action sequences are thrilling and the pacing of the story justifies its 131min running time.  Not only does the film incorporate genuine humour – either through Simon Kinberg’s clever script or nostalgic touches from the previous X-Men films – but the moral dilemma behind Mystique’s vengeful quest and the continued ideology of ‘who is the better species’ remind viewers that there is more to X-Men than superheroes.  Indeed, the conflict between humans and mutants remains consistent but during the course of the film, it ultimately proves the two are not much different at heart.

Aside from the practically overcrowded cast, Days of Future Past is easily the best X-Men film since X2.  Roll on the Apocalypse.

X-Men: Days of Future Past is out in UK cinemas on Thursday 22nd May.