French director Jean-Pierre Jeunet has been quiet since his 2009 wacky comedy Micmacs.  Even though he was worked quite consistently since his 1991 debut feature Delicatessen, Jeunet’s only English-language feature to date is the lukewarm 1997 sequel Alien: Resurrection.  But his latest film, based on Reif Larsen’s debut novel, manages to successfully convey his trademark narrative for English speaking audiences.

The Young and Prodigious T.S. Spivet revolves around 12-year-old T.S. Spivet (Kyle Catlett), who lives with his family in Montana.  Between his insect-obsessed mother (Helena Bonham Carter), his rancher father and his older sister, his scientific genius goes unnoticed.  One day, he is unexpectedly contacted by the Smithsonian Museum in Washington, DC, as his perpetual motion machine wins him a prestigious award.  As there is a party to be held in his honour, T.S. leaves home with a bulging suitcase to venture across the country to attend it.

Jeunet tells the story with a straightforward eye and by showing the world through the eyes of young T.S, he makes his most  accessible film to date.  As a film made for 3D, the special effects are implemented with care while the luscious, sun-kissed scenery pops out of the screen while making the most of isolated Montana, as well as the different parts of the US that T.S passes through on his epic adventure.  The fresh and witty humour doesn’t steal the thunder out of the sweet-naturedness of the story or Jeunet’s direction, allowing the audience to enjoy the uncomplicated visual jokes throughout the film. 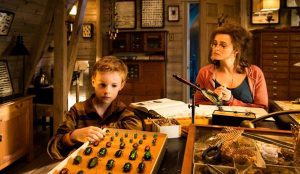 Young Catlett plays the precocious T.S with charm and wide-eyed innocence, yet a sense of humility comes across in his performance, despite his character’s tremendous intellect.  Helena Bonham Carter takes a step back from the bold performances seen in the Harry Potter series, Dark Shadows and Les Misérables, playing T.S’s subdued yet distracted mother, proving that she can play subtle in the right role.  It is, however, a shame that these two characters are part of a family consisting of seemingly stereotypical characters (the loner genius, the gruff father and the moody, fame-obsessed teenage daughter), as it plays towards the idea that T.S’s youth and intelligence are isolating him from his family, giving him all the more reason to avoid celebrating his achievements.

Overall, The Young and Prodigious T.S. Spivet is beautiful to watch and will make a star out of young Kyle Catlett.  Easily Jeunet’s best film since Amelie.

The Young and Prodigious T.S. Spivet is out in UK cinemas on 13th June.