Zip (Raul Rivas) and Zap (Daniel Cerezo) are two brothers who may be in for their worst summer holiday ever. They have been sent to a summer school, a notoriously strict place overseen by the mean Falconetti (Javier Gutierrez), and that means no fun whatsoever. Or, at least, it’s supposed to. To cut a long story short, Zap tends to be the more foolhardy/courageous of the two while Zip has the brains. Together, they find some marbles and start to have fun around the school, creating chaos and leaving a marble as their calling card. That’s all fun and games until they REALLY upset Falconetti, who is actually busy trying to find treasure hidden on the school grounds during night-time hours. Treasure that Zip and Zap, and their friends, think they can find quicker.

With the one-eyed villain (Falconetti wears an eyepatch throughout), sense of adventure, swift pace, and variety of puzzles to be solved, Zip & Zap And The Marble Gang seems to be as clearly influenced by The Goonies as it is by the source material, a comic by Jose Escobar. It’s not quite as dark or dangerous as that movie ever felt, but it’s wonderfully close. In fact, it’s a family movie in an exuberant, unpatronising style that may get older viewers waxing nostalgic for when more family movies were pitched at this level. 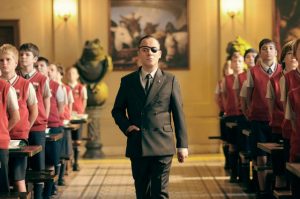 The script by Jorge Lara sketches everything, and everyone, out nicely. There’s nothing too complicated here, in terms of plot or character motivation, but Lara still does a great job of translating everything to the screen. You only need to get to the scene with a fast-talking “warden” to realise that the film is determined to make people of all ages smile at the antics.

Rivas and Cerezo are both perfectly fine in the lead roles. They’re easy to like, and also convincing as brothers. Claudia Vega is very good, and causes some tension between the two as Matilde, Falconetti’s niece, and Fran Garcia and Marcos Ruiz are both wonderful little scene-stealers. They play friends, members of the marble gang, and Garcia is a particular highlight. The film needs a good enough villain to work, however, and Gutierrez is certainly that. He’s mean, as you’d expect, but he’s also ready to take things even further than the kids might expect. Driven by his search for the treasure, he begins to care less and less for the safety of those who may stand in his way.

Everything here is smooth and effortless. The action is fun, the humour is well-judged, the tone is always just right, and it’s almost a perfect viewing experience. The only drawbacks are minor ones, not even worth mentioning here. Director Oskar Santos has another few movies to his name, according to IMDb, but I’m not familiar with his work prior to this. I’ll now be going back to see his back-catalogue, and I’ll be keeping my eye out for any future films that he decides to helm. And if he happens to make another Zip & Zap adventure, I’ll be eagerly in line to see it come opening weekend.