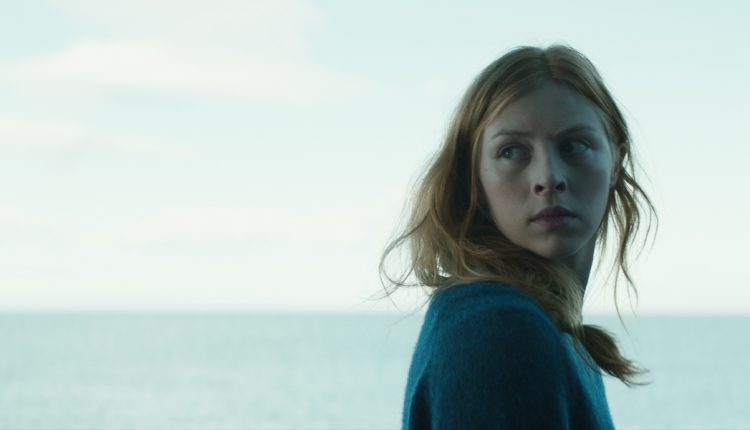 Sea Fever swallows you up in its first frame. The dark echos of the sea’s depths feel claustrophobic and unfamiliar, like an unknown lake plant grazing against your foot while you’re swimming. It’s uncomfortable. It’s frightening. You can’t see what’s down there. This unknown, the film’s stunning underwater visuals, the hums of the drowned underworld, and the creaking shell of a once lively vessel make Neasa Hardiman’s latest feature a triumph in atmospheric horror.

Siobhan (Hermione Corfield) is a marine biology student; she’s a loner and someone who feels more comfortable alone in her lab than out in the real world. So you can imagine when she gets the chance to go out at sea and study marine life in its natural habitat, she’s hesitant. And who can blame her? Being isolated with a bunch of strangers on a boat sounds like hell. Her anti-social nature surely does make it so, as none of the fishermen listen to her or trust her scientific perceptions. What’s more, she’s a redhead, and red hair is bad luck to fishermen.

There are many creatures from the deep yet undiscovered by humans who dwell in a realm of complete darkness. One such creature comes in contact with our protagonists. When the boat’s captain Gerard (Dougray Scott) accidentally sails into a restricted zone, they hit a mysterious, jelly-like, bioluminescent creature who slowly eats through the hull. It latches onto the boat, and eventually, the crew themselves. When the creature releases its squid-like tendrils from the hull, Siobhan and the rest of the crew believe all is well. But it’s a parasite, and parasites don’t just go away. They stick, get deep without your skin until you die or you explode from the inside (literally, there’s some great body horror in this). The longing for the sea that the term “Sea Fever” usually implies takes on a more literal meaning: A sickness at sea, and an agonizing one.

While what lurks under the sea may be frightening, the most frightening part of Sea Fever is the crew’s refusal to work together, and in this lies a much deeper meaning. It’s an environment absent of taking responsibility for one’s actions; an environment of the self and not of the other. The film becomes symbolic of the climate we are living in at this moment. Our planet is dying and we refuse to work together to fix it. Sea Fever presents a ship of people who are complexly crafted, from different backgrounds and ethnicities, who refuse to work together, constantly butt heads, and dismiss Siobhan. All of this leads to the film’s grisly end. The ship can’t make it intact without all hands on deck, and earth can’t survive without all of us working collaboratively.

Sea Fever also shows the value of our ecosystem. We may not understand all the creatures that live on our planet, but they deserve to share it with us, as Siobhan demonstrates with her humility towards the creature that is now tearing their world upside down. Humans are afraid of what they don’t understand, but through Siobhan’s scientific mind and sympathetic nature, Hardiman explains that, while many are dangerous, animals live and react the way they were conditioned to. There’s no changing it, and they shouldn’t be killed for it, either.

Sea Fever is a thrilling ride that excites and frightens. You become scared of the unknown on this emotional journey with one of the year’s best ensemble casts, which also includes Connie Nielsen, Ardalan Esmaili, Olwen Fouéré, Jack Hickey, Elie Bouakaze. They feel like the best family dynamics that you see in film and TV, which makes the crumbling of it hard to watch. You can’t help but think of John Masefield’s poem of the same name when you watch Sea Fever. It’s a poem that details the longing for the waves, the smell of the salty air, and the peace when you reach it. “And all I ask is a merry yarn from a laughing fellow-rover, and quiet sleep and a sweet dream when the long trick’s over,” the poem reads. But a long day at sea isn’t met with “sweet dreams” in this film. It’s a slow burn, or more like a slow drowning, that’s bound to make you seasick.

The film was viewed at the Brooklyn Horror Film Festival.