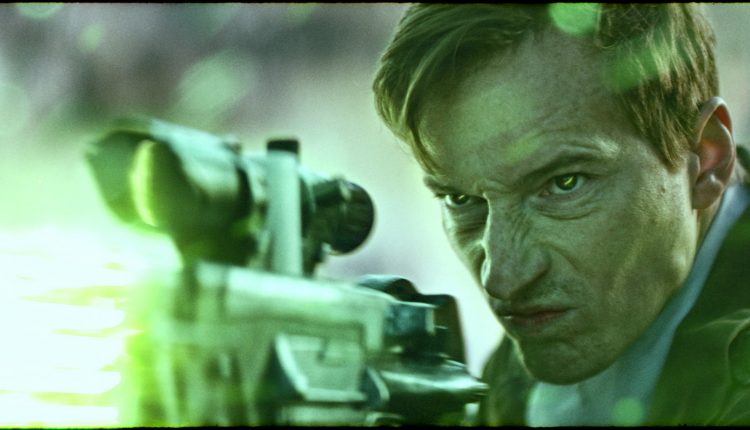 Blood Machines is a neon-soaked, synth-fuelled slice of science fiction that is perfect for Glasgow Film Festival‘s Future Cult strand.

When two space hunters track down a renegade ship, they see the ghost of a young woman pull herself from the machine. Struggling to comprehend what exactly is going on, they find themselves following this mysterious woman to depths they never thought possible.

The film is the work of director Seth Ickerman and the French musician Carpenter Brut. Ickerman originally directed the viral hit music video Turbo Killer and looked to expand on that idea with this feature.

Science fiction fans will be familiar with the trope of the spaceship’s computer system being female. For example, the Nostromo in Alien being controlled by Mother. Or Solo, retconning the saga to have the memory of droid L3-37 become the navigational computer aboard the Millennium Falcon.

Blood Machines plays on the idea that ships are inherently female, and the notion of the ghost in the machine. The two men who track a downed spaceship witness the salvage of the craft’s soul. One who emerges in the form of a beautiful woman. What follows is an intergalactic battle of the sexes played out across the stars.

Ickerman’s influences range from Metropolis to The Fifth Element, through to Blade Runner 2049. The striking aesthetic is complimented perfectly by some impressive visual effects and Carpenter Brut’s pulsating score which brings the film to life. It is reminiscent of fellow Gallic musicians Daft Punk’s score for Tron Legacy. Not only driving the film forward but can easily work as a standalone album.

From 5 minute music video to this 50 minute sci-fi calling card, Seth Ickerman demonstrates considerable talent and the future is bright. One can only imagine what is possible if given the opportunity for a studio-led, big budget space opera.

In the meantime, there is no ghost in this particular machine. This cult movie is alive and kicking.