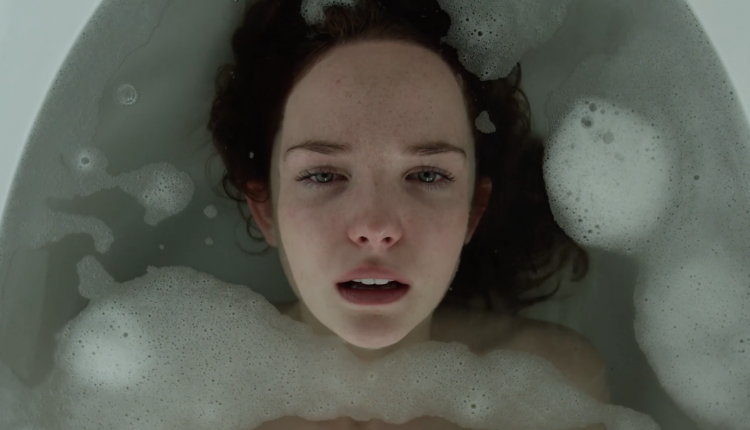 Alexandre Carrière’s Jade’s Asylum ends with the message that you have to do whatever it takes “to get that annoying boyfriend or that ghost that’s been forever haunting you to shut the f*ck up.” And going to an island inhabited by mysterious forest dwellers, who are out to kill, will do just that.

Divided into chapters, the film lives in its titular character Jade’s unstable psyche. Played by Morgan Kohan, Jade is staying in a mansion in Costa Rica with her boyfriend and his rich “Hugh Hefner wannabe” friends. The film follows a non-linear timeline, which is triggered by Jade’s boyfriend calling her delusional for thinking he was kissing another girl (a makeout session which is repeated throughout the film to an annoying degree). It is clear in the aftermath of this that Jade is suffering from some kind of delusion steeming from a childhood tragedy, as she is haunted by her father (Roc LaFortune) who wants her dead just like he is. Her asylum seemingly her own mind.

As Jade spends most of the film isolated from the group, the narrative becomes a disjointed wave of memories and hallucinations. It’s so incoherent that it, ultimately, makes for an aggravating watch. It’s impossible to know right away if scenes are real or just all in Jade’s head; which are flashbacks and which are in the present. Scenes are constantly being repeated, as well as dialogue, which is played over scenes like a score. It can be understood that it’s supposed to be this way, as representative of Jade’s mindset, but it leads to more questions than it does answers. (There’s also a romantic subplot between two local cops that feels out of place).

As the fourth chapter begins, and the horrors of the island come into play, the narrative becomes more grounded and focused on Jade’s fight to stay alive. Jade and co are being hunted like prey – picked off one by one, their limbs cut, mouths sewn shut – by monsters who don’t take too kindly to their visit. Covered in greenery and dripping with sap, they can only be compared to the crew of the Flying Dutchman in the Pirates of the Caribbean franchise, and they have the makeup effects and character designs to match.

Jade’s Asylum achieves in creating an eerie atmosphere with its use of sound and cinematography, as it shows both the beauty and horror of this paradise. The performances are all solid, but obviously, it’s Kohan’s show. She makes a great addition to the shortlist of Canadian final girls. Carrière makes some unconventional stylistic choices here, like having the film take place in daylight. You don’t see this often in the genre, and who knows if Carrière had this idea before Ari Aster released Midsommar, but it’s equally as effective in demonstrating that we really shouldn’t be going outside at any time of day.

Jade’s Asylum had its world premiere at the Fantasia International Film Festival.