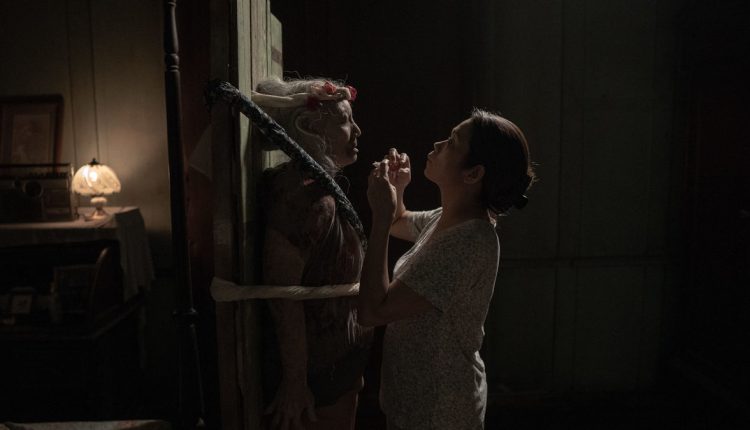 Dwein Baltazar’s Ode to Nothing lets Sonya’s loneliness consume the viewer through its silence. Silence permeates the first half of the film. There’s very minimal dialogue, as we look through a window (literally) into the routine and life of the film’s lead. The only sounds heard are the ones that we barely notice because we’re so accustomed to them. The sounds of passing traffic, rain splashing onto concrete, the ticking of a clock. Sonya’s seemingly dull and insignificant existence is also emphasized in Neil Daza’s cinematography. The film utilizes some beautifully direct and simplistic framing, keeping the viewer fixed on one set piece for minutes at a time. But its colour grading resembles that of decay. It has a lifelessness that resembles the skin of a corpse; a lifelessness that Sonya herself feels.

Played by Pokwang (her stage name), Sonya is incredibly isolated and melancholy. She lives with her father, but they don’t speak. She interacts with clients, but they are few. She often has to scream at people in order to get their attention, but even then they still don’t hear her. “No one notices me because they say I smell like rotting flesh.” But her life begins to change when a mysterious, bloodied corpse of an old woman is brought to her doorstep, waiting to be claimed. She becomes a lucky charm of sorts for Sonya, as her embalming business starts booming again. This elderly woman’s remains also becomes a cure for Sonya’s loneliness. She no longer feels invisible because she has found someone who listens to her. The most entertaining moments of the film are the conversations that Sonya has with this woman. Despite being dead, Sonya seems to believe that they understand one another. It’s magical to witness how Sonya changes throughout the course of the film because of this unlikely friendship and how it brings Sonya and her father closer together.

Ode to Nothing is an incredibly unique look at the effects of loneliness and an exploration of the human need for connection. Pokwang delivers one of the best performances of the year. Her performance feels effortless, but heartbreaking and impactful in its naturalism, as she peels back Sonya’s layers one by one. Baltazar’ latest work feels supernatural, but natural at the same time. It’s a strangely captivating film that proves to be one of the year’s best.

Ode to Nothing had its Canadian premiere at the Fantasia International Film Festival.