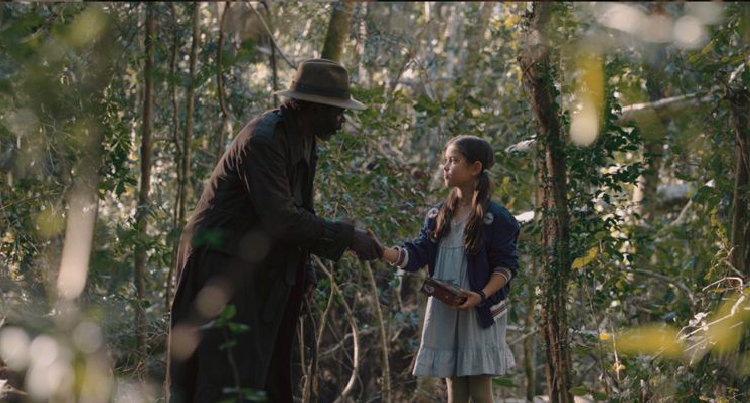 Harold Holscher’s debut feature, 8, is seeping in South African culture and folklore as reality and superstitions collide. It’s hard to imagine that a film draped in breathtaking imagery is hiding something dark – what the film’s characters refer to as a serpent who eats souls.

The film follows William (Garth Breytenbach) who returns to his family farm with his wife Sarah (Inge Beckmann) and adopted daughter Mary (Keita Luna). Once there, they meet Lazarus (Tshamano Sebe), an old farmhand who used to work for William’s father. Lazarus and Mary have both lost their family, and because of that, they form a familial bond that drives the film’s narrative. After his wife died from childbirth, and his daughter perished in a fire, Lazarus’s pain and suffering leads him to make a desperate decision. He makes a deal with the devil that leaves him with a curse and a bag weighing him down that holds a deadly possession.

Holscher found a great dynamic in Breytenbach, Beckmann and Luna, a family seemingly thrown together due to tragedy. William and Sarah are struggling with the fact that they can’t have their own children, while Mary struggles to see them as parents. But Luna’s Mary finds a father figure in Sebe’s Lazarus who carries the film. He is first and foremost a father struggling to cope with the death of his daughter and his performance reflects that in its poignancy. For a character that could have easily been labelled as a villain, Sebe provides a moving portrait of a tortured soul forced to pay for past sins.

8 is a horror film that focuses more on the supernatural than scares, but it still feels like its supernatural elements, and even cultural elements, could have used more depth. While it may lack scare factor, it’s an unsettling western horror that gives off the same energy as the best ghost stories told under dim candlelight.

8 had its world premiere at the Fantasia International Film Festival.