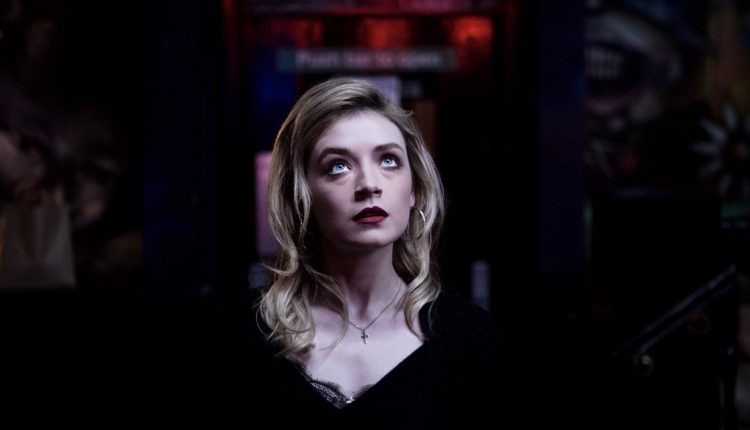 With A Good Woman is Hard to Find (2019), director Abner Pastoll demonstrates that his work is nothing if not surprising. Where his previously best known feature – the disturbing Road Games (2015) – let things bubble along with tones of underplayed rural horror, this new offering makes no such pretences. The gritty thriller – penned by writer Ronan Blaney – sets a number of contemporary themes – drug dealing, gangland turf wars and the complexities of single parenthood – against a recognisably bleak inner-city backdrop, to frighteningly realistic effect.

Following the death of her husband, young mother Sarah (a stirring performance from Irish actress Sarah Bolger) struggles to bring up her family singlehandedly on a grim Belfast housing estate. But things get worse with the arrival of Tito (Road Game’s stand out star, Andrew Simpson), a smalltime dealer who takes refuge in her house with some drugs he’s just recently acquired. Unfortunately he stole the stash from the local gang boss who, with his couple of heavies, is out to retrieve his property at any cost.

Though bursts of hardcore horror pepper the plot periodically, this film, as with the aforementioned Road Games, depends as much on subtle, psychological chills, as on graphic frights. The result is more the story of Sarah and her fight with numerous demons – both real and psychological – which threaten to engulf her and her young family. The loss of her husband – resulting in a fractured relationship with her mother, struggles to make an independent life for herself and her children and money worries – the arrival of Tito – and the world of drug and gangland warfare into which he pulls her – and the lack of assistance from authoritative figures in the shape of the police, are but a few of the factors in play which would make a lesser woman disintegrate. But the viewer soon discovers that Sarah is a far from docile widow, as the film takes the form of a visual documentation of her journey from little more than a fragile, damaged girl into a self-sufficient, independent woman.

As with the best genre films, Pastoll’s camera cuts before the viewer sees the real meat, on the brief occasions when the horror really kicks in. That said hearing metal sawing bone or ripping flesh is frequently more disturbing than the actual sight of it doing so. As a result this, juxtaposed with lashings of blood, more than compensates for the lack of overtly visceral visuals.

One major question which niggles at the background of this otherwise taut work, is the choice of Northern Ireland, and more specifically Belfast, as the environment for it to unfold in. As no great play is made of the city or surrounding countryside – little reference  is made to the troubles or political tensions which the wider public associate with this part of the British Isles – the viewer can’t help but ask why it was picked upon for a setting. Indeed the rundown housing estate where Sarah is forced to eek out her grim existence could have been in any one of a dozen nondescript British cities, and leaving its location undefined may have added something extra to the overall feeling of un-belonging which permeates Sarah’s life.

This is the only downside however in an otherwise entertainingly slick film, which proves Pastoll to be as unpredictable a filmmaker as he is talented. Blending the unfortunate realities of so many in 21st century cities, with a degree of horror and human extremities which we can only hope we’re never be pushed to uncover, A Good Woman is Hard to Find is a fresh if, at times, hard to watch, slice of urban horror.