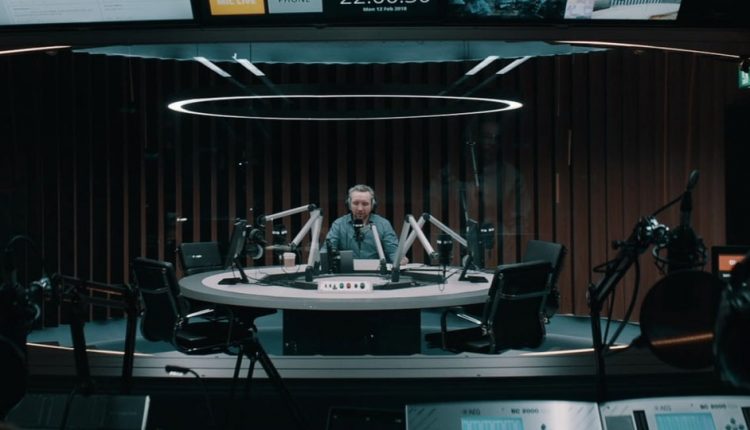 Making its on air debut at Frightfest, Feedback puts the “shock” into Shock Jock in a thriller that dials the tension all the way up to 11.

Jarvis Dolan (Eddie Marsan) is famous for waxing lyrical on the state of Britain on his political opinion show. The outspoken radio personality threatens to air an inflammatory undercover interview that will create shockwaves through the system.

However instead of an assault on the airwaves, his broadcast turns into Assault On Precinct 13 when his team is taken hostage by a group of masked intruders. If he does not follow their instructions, the skeletons in the shock jock’s closet may not be the only ones lying dead on the floor by the end of the show.

Alonso skillfully builds a claustrophobic atmosphere as the walls and cinematography close in around the DJ. Entirely set within the confines of the radio station, the story is driven by smart, rapid-fire dialogue and compelling performances. Pausing to catch its breath only after moments of extreme violence.

A good radio talk show host must command the public’s attention for hours on end. Similarly a film set in one location with a lone protagonist requires an actor capable of holding the audience captive.

Primarily seen as a supporting actor, Marsan seizes his opportunity on the mic with a complex, constantly evolving role. Able to play both good-natured (The World’s End) and villainous (Tyrannosaur), his talent shines through as Dolan is driven to the Peter Finch in Network levels of stress and cracks slowly appear in his carefully crafted persona.

Frightfest fans will go Radio GaGa for Alonso’s debut that will generate nothing but positive Feedback for Eddie Marsan’s lead performance.