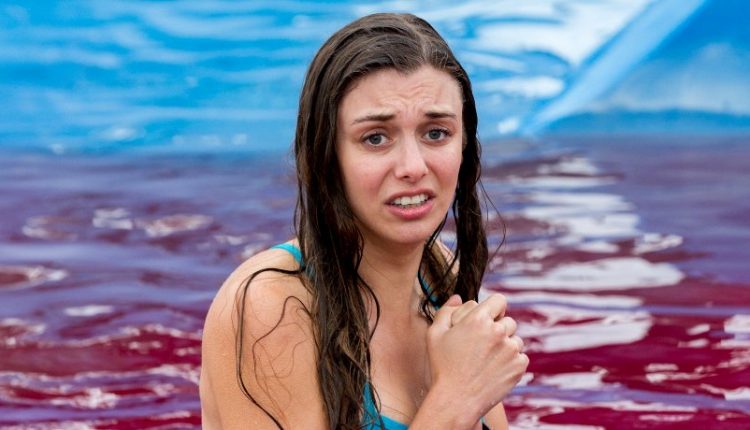 Though obvious what director / writer Renaud Gauthier was aiming to achieve with the comedy horror Aquaslash, it quickly becomes apparent that he fails to hit the mark by a mile. Clearly intended as a gory, blackly humorous send-up of 1980’s teenage slasher pics, his film is instead so preoccupied with sex that all else pales in comparison.

The Wet Valley water park is all set to welcome a group of sex mad teenagers, just finished high-school for the holidays and ready to party. Unfortunately someone has a grudge against the park and is determined to give its guests one wet and very wild weekend to dismember.

Aquaslash is a one trick pony, which unfortunately doesn’t trot onto the screen until two thirds of the way in. With slasher films what there is of a storyline is usually there merely to connect one set-piece murder with the next. However where genre defining classics like Halloween (1978) and Friday the 13th (1980) started with a bang and continued to pepper grisly murders throughout the action, Gauthier’s narrative opens with a, never fully explained, accident which is in someway meant to be the catalyst for the killer’s murderous vendetta decades later. Then hardly anything murderous happens until the gore soaked climax.

Where the film should have focused on cutting the cast down to size, it instead seems obsessed with teenagers getting their kits off, with a few murders thrown in as an afterthought. Though teenage kicks have always formed an intrinsic part of the slasher genre, often being the reason behind a lot of its film’s killings, you most times felt the sex was there as a means to an end, not the main attraction. With Aquaslash however, high-school high-jinks seem the order of the day to the detriment of the slashing which, let’s be honest, is what most viewers are really after.

Keeping all this in mind the cast, it has to be said, more than adequately meet the acting standards required. Appearance clearly took precedence over any thespian ability where casting was concerned, and in this department the largely unknown ensemble more than fit the bill. The waterpark where the story unfolds is awash with fit, toned and tanned young flesh, providing plenty of prime meat for when any mayhem eventually sets in.

It’s sad to say – for a film which had such potential and could have developed its premise to encompass any number of inventive ways to get rid of its cast of high-school delinquents – Aquaslash turns out a damp squib with little to get cut up about.