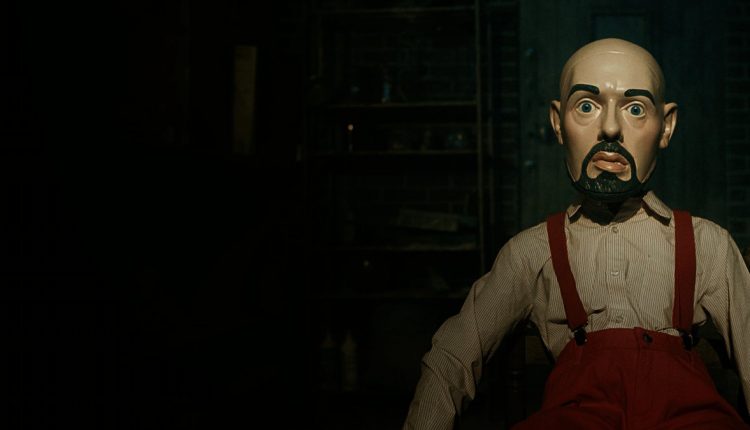 Originally shown in France as a series of short TV episodes but now released in longer film form, Dark Stories is made up of a collection of eerie tales connected by an overarching story, in the style which Amicus studio was famous for during the 1960s and 70s.

As with the films from Amicus, not all the segments contained within Dark Stories hit the mark. It’s unavoidable – as with literary anthologies – when you have five short stories (six if you include the connecting tale), that there’ll be a couple of duds amongst the gems. With this in mind, though there are no real stinkers, some do standout in superiority from the rest.

It has to be said, the strongest story is the first. It’s always tricky when you play your ace straight off, inevitably leaving the viewer anticipating equal shivers which don’t always materialise. This doesn’t really matter here though, as the darkness and malevolence of the first story permeates the remainder of the film. How many of us when visiting an art gallery, haven’t imagined what it would be like to enter a painting and experience firsthand the scene set within it. Which is what happens here, though the consequences, which are vividly portrayed, may make you rethink your fantasies in the unlikely event that they’d ever become reality.

The other stories include two which manage to continue the feeling of discomfort evoked in the first – one about a jogger haunted by a ghost in a lonely park, and another about a reanimated corpse who returns to wreak revenge on a gangland heavy. Filmed in moody shadow what the stories lack in depth – they are, to be honest, pretty basic in the plot department – more than compensate for with atmosphere and style, characteristic elements of French life which clearly seep into their TV and film productions.

It is the last two stories – about a demon who terrorises a woman with devastating results and the final revolving around religious obsession and alien abduction – which let the film down somewhat. Though not bad in and of themselves, when compared with the others, these tales fail to maintain the edgy, surreal air established earlier.

All said the five tales which make up Dark Stories – along with the connecting fable combining a life-size doll with a twisted sense of humour and a case of vampire tainted mother love – gel well to produce an air of creepy horror shot through with a vein of Gallic style, resulting in an unsettling visual experience.