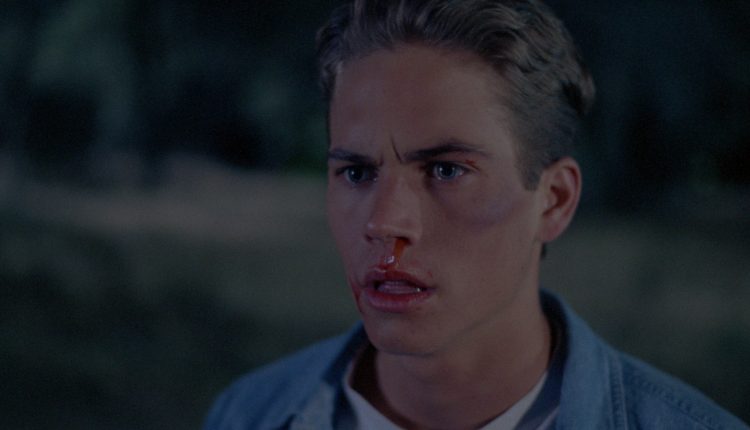 Like dinosaur blood within a mosquito encased in amber, Glasgow Film Festival spared no expense to bring the extinct cult classic Tammy And The T-Rex roaring back to life at GFF20.

However were they so preoccupied with whether or not they could, they didn’t stop to think if they should?

It is hard to know where to begin with this film. Here is something that was filmed as gore-filled body horror but then hacked to pieces to turn it into a more PG-13 friendly teen movie. It is also a film where Paul Walker’s brain is placed inside the body of an animatronic Tyrannosaurus Rex and tries to be reunited with Denise Richards so…

Yes, really. That Paul Walker of The Fast & The Furious and Denise Richards of Wild Things. Ultimately the plot can almost be boiled down to the following line from Jurassic Park:

The ultimate question is, however, is it actually any good?

Objectively speaking, the answer is no. The budget is as tiny as a T-Rex’s brain. The acting overall is atrocious. Walker and Richards do their utmost to bring some intensity and brooding teen angst when having to deliver lines straight-faced like “Is that really you in there? Oh Michael, what have they done to you!” but it is the wrong film for that. Everyone else appears to be acting in a different film. The film is so confused in fact, it can’t decide if the central character is called Tammy or Tanny!

However… all that being said, the end result is surprisingly watchable. You just need to switch off your brain, in a similar way to the main character, sit back and enjoy the ride.

The only viewing experience in recent memory that is even remotely comparable is watching The Room for the first time. It will be viewed in a different light now 26 years on. Similar to the way we now know dinosaurs are related to birds. It might not have been the filmmakers’ intentions, but it will now find Raptor-ous applause with the late night cult horror crowd. Mainly down to the reinstated special effects that crank up the gore factor to a satisfyingly absurd level.

Guess Dr. Ian Malcolm was right. Life, and Tammy And The T-Rex, really did find a way to avoid extinction.