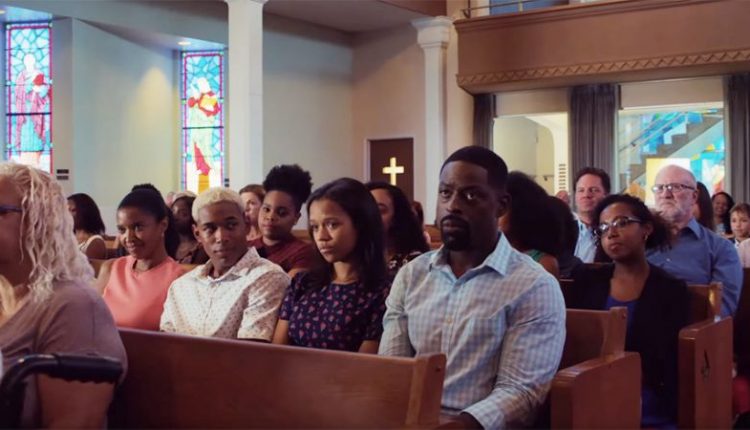 Waves is effectively a film with two halves. The first follows Ronald’s son Tyler (Monsters and Men‘s Kelvin Harrison Jr.), a high school athlete and boyfriend of Alexis (Alexa Demie). First seen as carefree and popular, it becomes clear that he also faces constant pressure from Ronald. As a result, the stress of an altered future causes Tyler to go down a self-destructive path, which culminates in a heartbreaking fall from grace.

The second half follows Tyler’s sister Emily (Taylor Russell), who struggles to deal with her brother’s actions. At first glance, there is a fear that she may follow the same footsteps but instead, she opens up to new love interest Luke (Lucas Hedges). Although it is less broody than Waves‘ first half, Emily’s narrative offers hope and maturity during difficult times. Her deletion of social media, in particular, highlights her integrity as the comments about Tyler remind us of its toxicity despite its misguided intentions.

The wonderful cast delivers an eclectic variety of performances. Brown quietly commands the screen as Ronald while Russell and Harrison Jr. are compelling in their respective roles. Demie also provides a strong performance as Alexis, as does Reneé Elise Goldsberry as Ronald’s wife Catherine.

Adding to A24’s impressive roster of personal journeys such as The Florida Project, Moonlight and more recently, The Farewell, Waves is an emotional rollercoaster. Through careful eyes, Schutt focuses on the intimacy of personal interactions and how emotions can brew so quickly. In addition, the dialogue is limited to close conversations so it is easy to sense the growing tension between the characters. Combined with the visceral imagery and soundtrack, the visuals elevate this fraught tale into an overwhelming, hyper-sensory piece of filmmaking.

Intense, engrossing and powerful in its execution, Waves is one of those rare films that will haunt you long after the credits roll.