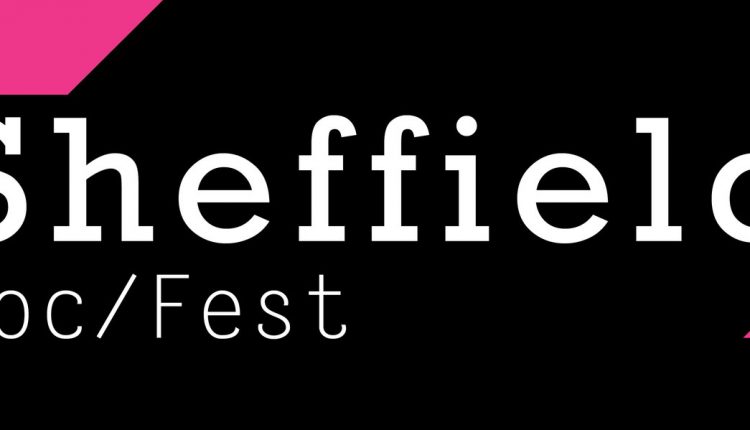 Day four of the festival and things are in full swing now, all over Sheffield there are talks taking place and drinks being held, deep within the bowels of the Festival buildings projects are being pitched, bought and sold. It is really encouraging to see the number of films screened at this year’s festival that were pitched and sold at previous Sheffield Festivals, to see them come full circle completing the process. Up at street level though, the crowds are massing for what turns out to be an incredibly sunny and well-attended week. We only saw the one film on Monday, which break was rather needed after the weekend, though it would be back to the full three on Tuesday. 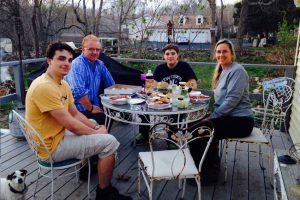 After the unrestrained fun of the previous day’s music films, it was back to earth with a sudden thump with this film about the survivors of the classroom massacre at Sandy Hook Elementary School, in Newtown, Connecticut. Though not as harrowing as I first thought it would be, listening to the parents of children who were gunned down needlessly and in cold blood, and, alarmingly, one of the children who was actually there, is certainly unpleasant. And although not as structurally interesting as some of the other films on display, and with constant background piano music straight from a Hallmark production, the film is held aloft by the weight of the interviews with everybody involved and the importance of the back-story. I realise that this is the story of the survivors, and we follow them fairly closely as the one year anniversary of the tragedy approaches, but there is little to no exploration of the life of the perpetrator himself, Adam Lanza, a twenty year old psychiatric patient. Still very much worth a watch, though I couldn’t help but wonder what another filmmaker would have made of the material.

Tuesday brings with it one of the most anticipated films of the festival, and also one that promised to be a great oddity, but that was, in fact, anything but. There was also a film about sheep. As the days have been going on, so the volunteers have been more and more insistent on audience voting slips being torn and handed in. I’ll provide a breakdown of the actual festival winners at the end of this – the audience award winner will only be revealed on Monday 15th June. 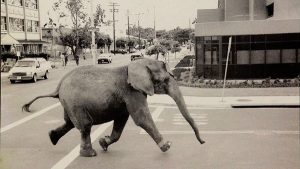 There are many films on show this year that explore in some detail the horrors and struggles of humanity, and yet none seemed to stir the audience’s emotions quite like this one. In Honolulu in 1994, a circus elephant named Tyke stuck her head out the window, shouted “I’m mad as hell and I’m not going tot take it anymore…” and went on a rampage from the circus big-top out into the streets of Kakaako where, 30 minutes later, Tyke eventually fell in a storm of police bullets. Hers was not the only life lost that day, she killed her trainer Allen Campbell who was trying to protect her groom, Dallas Beckwith, who was seriously injured. This was a tragic end to a circus career highlighted mainly by the abuse she suffered at the hands of her trainers from the Hawthorn Corporation, an evil sounding, shadowy company that leased out animals and trainers to circuses all over the world.

Tyke Elephant Outlaw was a nice counterpoint to some of the other films on show at the Festival which celebrate the history and wonder of the Circus as an institution, and the screening was attended by Professor Vanessa, local circus authority, who was at pains to point out that there are indeed many changes to the laws governing circuses and their care of animals taking place, with Ringling Brothers promising to phase out their use of animals over the next few years. It’s not only in the politics of man that film can affect important changes.

Heading in for the next screening, the ushers at the doors were handing out paper masks, not necessarily a good sign. 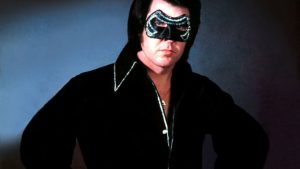 I had high hopes for this one, I really did. Ostensibly a film about a man who had an uncanny resemblance to Elvis Presley, and could certainly sing as well as the King, but who never had really had the draw. Here was an unwitting impersonator who insisted on wearing an assortment of Zorro-like masks for the majority of his career, which career never even came to close to the heights he or his supporters at Sun Records expected. Remaining largely anonymous throughout his career, despite fairly consistent output, his work now really only exists in collectors’ record fairs and books of funny album cover artwork. For the first hour or so of this film I was fairly certain it was all made up, which can quite often be a good thing, though in this instance I couldn’t quite figure why the director would fabricate something quite so dull. The novelty value of the mask wore off fairly quickly and in the end, despite a rather downbeat ending, I was left thinking that this was a great opportunity greatly missed.

The second of the day’s animal films is also one of the most heavily promoted – throughout the festival there were more posters for this than other film. The director, Magali Pettier, along with the family who are the subject of the film were popping up all over the festival map with a mock-up paddock and three fantastic model sheep, posing for photos with anybody and everybody. I saw the sheep in at least four different locations over the first three days. 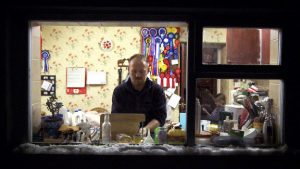 An odd film, this, though a fantastic one. Following a family of tenant sheep farmers in the Pennines through a complete farming year, there is a joy and a vitality to this film that seems at odds with the bleak, windswept landscape of the North East. Despite the humour of the poster, and the overall feel of the promotion, the film is oddly sedate to begin with. It has more in common with the works of Nicholas Phillibert and Frederick Wiseman than first appears. The footage of the sheep, and especially the footage of the farmers themselves (even at intimate moments like Christmas morning) is captivating. The sense of place, and the sense of the amount of work the farmers put into their sheep is amazing, even though we are told that there is very little financial gain and the future is uncertain, there is a joy and an appreciation to this film that many others with far more production heft can only dream of.

And just like that, we’re into the final day. Despite the fact that we’re into a working week and nearing the end of the festival, all of the screenings are still packed – more than one director commented on the fact that audience numbers far exceeded their expectations, Black Panthers: Vanguard of the Revolution, for instance, sold out all three of its showings, quite rightly so too.

There was a lot going on on this, the final day of Doc/Fest: there was the awards ceremony at The Crucible Theatre in the morning, another full programme of films throughout the day and then two special events later in the evening. The first was the Closing Night film, Roger Graef and James Rogan’s Monty Python: The Meaning of Live (which Roger Graef was sadly unable to attend due to illness, though Michael Palin was there for the Q&A) and the second was a surprise screening of What Happened, Miss Simone?, Oscar-winner Liz Garbus’ Netflix documentary about the life of Nina Simone. I saw neither of these two films however. Instead, I made my way through the crowds to see what was for me the most anticipated film so far: 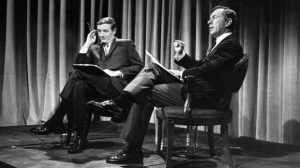 Brilliant film, about two brilliant characters during a brilliant time in American history. Oscar-winners Neville and Gordon explore in remarkable depth the incredible television debates, during the 1968 Republican and Democratic Conventions between two titans of the intellect, William F Buckley and Gore Vidal, one a staunch conservative master of debate, the other a liberal novelist. ABC hire the two to liven up its coverage of the conventions and I don’t think they were quite aware of just how it would all play out. Already, Buckley and Vidal were long-time sparring partners and as soon as the first broadcast began, the back and forth became more ad hominem the longer it went on, resulting, in debate number 9, in Buckley’s infamous retort to being labelled a “crypto-nazi”, which retort would go on to haunt the two men for the rest of their lives. The interview is great, context is set and explained and then we have the footage itself, which is a pleasure to behold. Seeing two intellectual heavyweights slowly losing their cool is remarkably intense and funny.

And then finally, the last film of the 6 days, one would that inspire more debate and arguments than any other.

Another film that is very timely. 3 ½ Minutes follows the shooting of an unarmed black teenager in Jacksonville, Florida, its aftermath and trial of Mike Dunn, the white man accused of first degree murder. When Dunn confronted the four teenagers in their car outside a petrol station, asking them to turn down their music, the situation escalated rapidly, resulting the car being peppered with ten bullets, one of the teenagers killed. Dunn swore to police that he saw a rifle in the car and the case played out very publicly, being so soon after the similar Trayvon Martin killing. The director Silver was given full access to all of the trial footage, and even audio recordings of Dunn whilst in custody. The trial is conducted in an atmosphere of extreme racial tension and the film, to be fair, does a very good job of giving us both sides of the story. With certain elements of the case down simply to hearsay and hinging on interpretations of individual laws, the trial builds to a fantastic climax.

We were still arguing the various merits of the case well into the night. A fitting way to end a festival screening the very finest the Documentary world has to offer.

So then, all that remains is to reveal my picks of Sheffield Doc/Fest 2015:

The official Sheffield Doc/Fest Awards were awarded as follows:

Environmental Award – How to Change the World