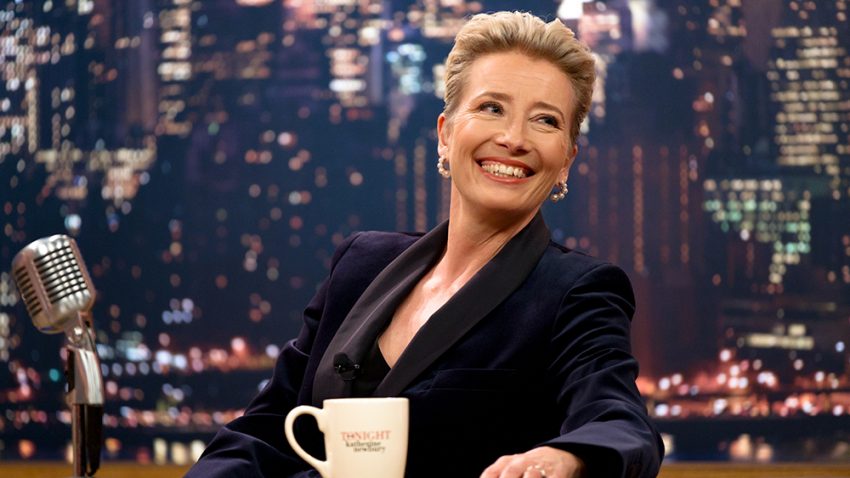 Starring Emma Thompson and Mindy Kaling, Late Night is the latest film by Nisha Ganatra. It follows Katherine Newbury (Thompson), a late-night talk show host who is on the verge of cancellation. Desperate to save her show and improve gender equality on her team, she recruits Molly (Mindy Kaling) as her newest staff writer.

At first glance, Late Night has a very conventional narrative – two polar opposites who enlighten each other. But Kaling’s script offers a very modern message. Inspired by her experience on The Office, the story comes at a time whe the entertainment industry is increasingly recognising the efforts of women. Late Night highlights the struggles of diversity and equality in the workplace, as well as an environment dominated by Caucasian men. At the heart of it is Katherine and Molly, who aim to be recognised on talent but feel like they will always be judged on looks or gender.

For instance, the ironically sexist and elitist environment of Katherine’s TV show reflects the old-school values of its host. Katherine is an elegant and established feminist who doesn’t want to adhere to younger audiences because it would ‘down-class’ her. This makes her haughty and arrogant, and her dependence on jaded male writers highlights the values she claims to hate but disregards because she is the boss.

On the flip side, newbie Molly is the classic fish out of water. Outclassed, Indian and inexperienced, her naivety makes her a target among her co-workers such as lead writer Tom (Reid Scott) and heartthrob Charlie (Hugh Dancy). But her heart is in the right place – knowing that her passion lies in comedy provides humility and the need to establish herself drives her to succeed.

Offering wonderful performances, Thompson and Kaling share a chemistry that transcends the boss-employee relationship. Their contrasting attitudes enable them to experience the career ladder from each other’s POV, as well as share their struggles. Behind the camera, Ganatra incorporates a warmth that enables Late Night to offer more than its feminist message.

Overall, Late Night is as inspiring as it is entertaining. Both Thompson and Kaling deliver great performances, but the latter finally has the chance to highlight her screenwriting skills on the silver screen.

Late Night is out in UK cinemas on Friday 7 June.