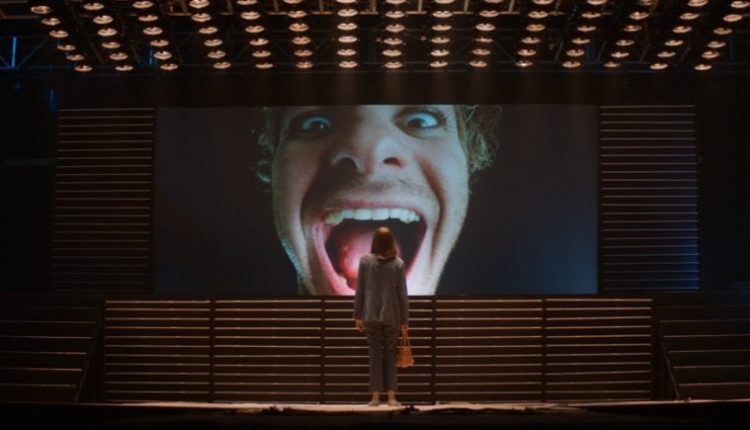 Andrew Garfield is the social media platform prophet who is mad as hell and not going to take it anymore in Mainstream. Gia Coppola’s cautionary tale that attempts to be a Network for the internet age.

When aspiring filmmaker Frankie (Maya Hawke) discovers the cynical and subversive Link at a shopping mall, a video of him goes viral. Desperate to advance her career, she works with friend Jake to turn Link into an internet celebrity. One designed to satirise the over-populated influencer world of social media.

Success comes with the invention of a Youtube game show hosted by No One Special called Your Phone Or Your Dignity where contestants must decide between a forfeit or exchanging their smartphone for $100 and a Nokia 3310.

In a very specific UK televisual reference, it harks back to a segment on The Word called The Hopefuls where people would submit themselves to degrading or humiliating acts and respond with the line “I’d do anything to be on TV”. Nowadays, social media and the internet is the source of our all-too-fleeting 15 minutes of fame.

The lead character’s name Frankie could be seen as a nod to this being a modern day retelling of Mary Shelley’s Frankenstein. Maya Hawke is the Doctor who creates a social media personality by scouring the internet and using successful elements from multiple formats to mould Garfield into a brand new star. However her creation soon learns to think for itself and ultimately becomes her own Monster.

Much like how people get Frankenstein and the Monster mixed up, the film’s message feels very confused. At times it aims to satirise the crazy and ridiculous wormhole that the internet is sucking us down into. Yet just like No One Special it becomes seduced by the glamour of it all. Becoming indistinguishable from the world it claims to mock.

To begin with, the filmmaking is very raw and unpolished. Mirroring Hawke’s initial style, the editing is messy and the effects crude and rudimentary. As the content becomes more popular with viewers, the production values increase and this is reflected on screen as well.

The irony in choosing Andrew Garfield to play Link is one thing that is not lost on the audience. The so-called saviour of the internet, the man who is holding up a mirror to our obsession with social media, is one of the men responsible for creating it in The Social Network.

Garfield’s Link/No One Special is easily one of the most toxic and obnoxious screen characters of recent years. The way his online character is born is similar to that of Natalie Portman’s pop star Celeste in Vox Lux. Both characters are thoroughly repellent having bought into their own hype. Becoming the thing they claim to hate and feed the system rather than subvert it. Yet both are magnetic to watch and it is impossible to argue with everything that they say.

When No One Special calls out the audience (both in the movie and watching the film in the cinema), he speaks the truth. It might not be comfortable to hear but one cannot deny it. Has the internet turned us all into Frankenstein’s Monsters?

Its message may be muddled but thanks to Garfield’s mesmerising performance, Mainstream is certainly clickworthy.