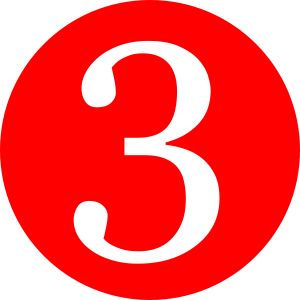 The Art of the Hollywood Backdrop, by Richard M. Isackes & Karen L. Maness 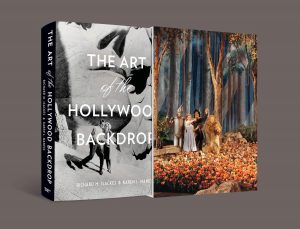 Actors and actresses transport cinema goers to another world with their performances on screen.  No matter how good the stars are in front of the camera though, it all amounts to nothing without an authentic setting for the action to play out against.  Filming on location is fine to a point.  However there are some occasions which require filmmakers to work a little visual magic – for a host of reasons from simple logistics, to the fact that the desired location does not, and could not, ever exist in real life.  Which is where the skill of the scenic artist comes in.  These are the people who conjure a visual fantasy that, with the right camera angle and lighting have made the impossible possible in the world of the movies, transporting Judy Garland to the wonderful land of OZ and bringing Cary Grant and Eva Marie Saint close to death on the top of Mount Rushmore.  Even today, with the advancements in digital technology making most of the old filmmaking processes obsolete, scenic artists still work on such films as 2014’s blockbuster Interstellar, though their skills are becoming required less frequently.

With this in mind scenic artists and designers Karen Maness and Richard Isackes have come together to create The Art of the Hollywood Backdrop – published by Regan Artsa – a sumptuous and glossy visual history of the magical backgrounds and the artists who created them, during Hollywood’s Golden Age.  Taking you from the earliest days of cinema with films like Fox Film Corporation’s Cleopatra (1917), via such iconic classics as MGM’s Gone With the Wind (1939), to the modern day with films like Universal Pictures’ Hail Caesar! (2016), the book outlines not only the job of a scenic artist but how they trained and created artistic masterpieces which brought life to everything from Paris’ Notre Dame Cathedral in MGM’s musical An American in Paris (1951) to New York’s skyline in Columbia Pictures’ Ghostbusters (1984). 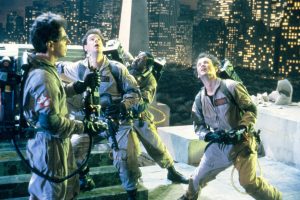 Like all the best film books The Art of the Hollywood Backdrop can be approached in two ways. For those interested in the history and technicality of the processes involved in the scenic artist’s job, the book is split into two main parts. Firstly an introduction – this will likely be the first time you will have seen such a piece last over 100 pages – takes you on a scenic tour of dozens of films with black and white and coloured stills, many of which have never been seen before. Secondly we are introduced, through biographical pieces, to some of the most famous artists – who worked for the major studios like MGM, Warner Brothers, Universal, Columbia, 20th Century Fox and Paramount – including George Gibson, Duncan Allison Spencer and Ben Carré. If, on-the-other-hand, you simply want to immerse yourself in one of the most outstanding collections of film stills ever collected in one place, then this is undoubtedly the book for you. Page after page of photos will let fans see beloved and familiar films from a different angle and in a completely new light. 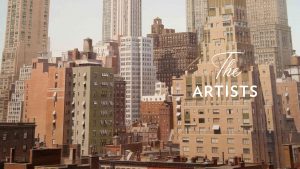 Made with full support and help from many the artist’s families and the studios they worked at, as well as enlightened by interviews with some of the surviving artists from the Golden Age, the book is set to become a collector’s item with film fans and scholars.  Not exactly cheap, weighing in as it does at a hefty £76.99, neither is this massive tome the kind of book to lay on your knee – a handy coffee table may be required for propping the book open whilst reading.  However, if you are looking for one thing to treat someone special (or yourself) to this Christmas, The Art of the Hollywood Backdrop should be on every film fans wish list.