If you want to relive those heady days of 80s club sounds as well as one of the greatest cult film experiences of that decade, the place to head this June is the Troxy in East London.  On the 26th of that month the biggest and best power ballads club night Ultimate Power Club will put on their first ever film and club event when they show the ultimate 80’s film experience Top Gun.  They will follow this with a full on club night in what promises to be a wild experience for all the senses. 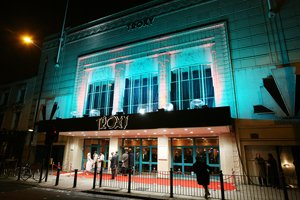 Co-founder of the Ultimate Power Club, Dave Fawbert, enthused about the event in a statement released yesterday.  “For eight years we’ve been spreading the gospel of the power ballad to the UK and now we’re delighted to be announcing our first-ever film and club night event, with one of the greatest films ever made, followed by the greatest songs ever written. This will be the most fun you can possibly imagine. We can’t wait to fly with Maverick and Goose, and then rock into the early hours in June.”

Early bird tickets are a mere £20 and are available, along with further information for the evening, from the Ultimate Power Club website at www.ultimatepowerclub.com/tickets or from Ticketmaster.  Get along on the 26th June if you want a night of 80s nostalgia, which will allow those who remember it to relieve it all again, whilst those who missed it the first time round will get an opportunity to see what all the fuss was about.