BFI celebrates the life of D.W. Griffith, ‘The Father of Film’ ……

This June sees the BFI on London’s South Bank host a special season dedicated to the work of D.W. Griffith, the man referred to by Lillian Gish and Charlie Chaplin as the ‘Father of Film’ and the ‘Teacher of Us All’.  Griffith was undoubtedly one of the greatest pioneers of silent cinema and – despite his three hour epic The Birth of a Nation (1915) being notorious for its racist overtones – his films are now highly regarded as part of the foundation of early film.  The skill of Griffith as a director and filmmaker advanced many film techniques in the early days of filmmaking which audiences today take as the norm, such as the use of dramatic close-up as well as the art of parallel cutting (alternating two or more scenes, frequently taking place simultaneously but in different locations).

As well as screening The Birth of a Nation, the films being shown will also include Griffith’s first directorial outing The Adventures of Dollie (1908) and his first talkie Abraham Lincoln (1930), as well as the influential classic Intolerance (1916).  These will be accompanied by a documentary from 1993, by the regarded film historians Kevin Brownlow and David Gill, called D.W. Griffith: Father of Film, as well as a round table discussion featuring speakers who will be appearing at a major international conference at University College London, being held to celebrate the centenary of The Birth of a Nation. 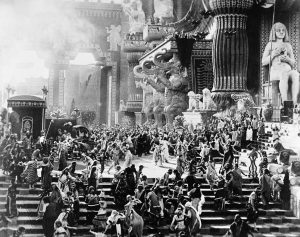 Further details of the season can be found on the BFI South Bank website at: https://whatson.bfi.org.uk/Online/