Once bitten – it’s time to return to the Hotel Transylvania ……

You can’t keep a good blood sucker down – or any of his other ghoulish friends for that matter – especially when their on-screen adventures make a pot of money for their creators.  At least that’s how it appears to be for Count Dracula, his daughter Mavis and the other creatures who featured in the 2012 animated smash Hotel Transylvania, as they’re now back in a sequel with the inspired title of Hotel Transylvania 2.

The new film, again under the direction of Russian born animator Genndy Tartakovsky, also features the voice talents of a host of stars from the original hit, including Adam Sandler, Selena Gomez and Kevin James amongst others.  This time round Dracula (Sandler), Mavis (Gomez) and Frankenstein (James), along with their fellow residents of the spooky guest house, have to deal with a visitation by Dracula’s father Vlad – it’s really not hard to see the vein of humour they’re aiming at here – voiced by none other than the legendary Mel Brooks.  As old fashioned Vlad clashes with the modern day monsters, you can be sure the results will mean comic mayhem for everyone. 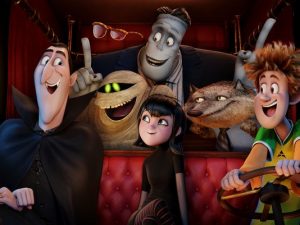 We’ll have to wait a few months before we can see whether Drac and his ghoulish friends survive the visit from his father, when the hotel opens its doors to UK for a second time on the 9th October.  In the meantime however the folks at Sony Pictures Animation have released a new teaser trailer just to get you in the mood.  Looks like it’s going to be a scream.