CG animation has become a large part of modern media. With the likes of Shrek, Madagascar and Ice Age enthralling children and adults alike all over the world, as well as pulling in some serious box office figures and revenue.

The benefits are obvious, film makers are free to do whatever they choose without the constraints of reality holding them back.

May 2013 sees the release of another such film, from 20th Century Fox and Blue Sky Studios comes Epic. 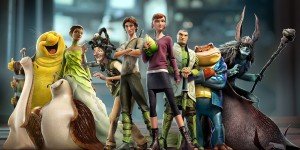 Epic will be available in 3D and is billed as being a battle between the forces of good and evil in a magical kingdom.

When a teen girl is mysteriously transported into this mystical world, she must team up along side a band of rag-tag characters, in order to save their world, as well as her own.

There is not much better than settling down on a Sunday afternoon, with your child/children, to watch a film and one such as this is perfect.

Light hearted, fantastical, family fun. Epic seems to promise it all and we here at Flickfeast anxiously await its release.

In the meantime you can view the trailer here…

To keep up to date with the progress of this release then why not like its Facebook page https://www.facebook.com/EpicTheMovieUK

Also, whilst you’re there, why not check out our very own Facebook page for all the latest film news and reviews.