In the cutthroat business of glossy magazine publishing, editors will look for any theme to boost sales figures – and there’s no subject more attractive than that of celebrity and the ultimate celebration of this rarefied enclave, the Oscars.  With this in mind all the big monthlies theme whole issues around the highpoint in Hollywood’s calendar, and this year is no exception with W magazine dedicating their February issue to the ‘Movies’ and a portfolio of stars in an array of the most unlikely of poses.  The new March issue of Architectural Digest – the American institution which guides its readers each month through the homes of the rich and famous – features this year’s Oscar host Neil Patrick Harris, and his partner David Burtka on the cover as they show off their New York City townhouse, whilst Harris appears again on the front of the February 20th issue of film bible Entertainment Weekly. 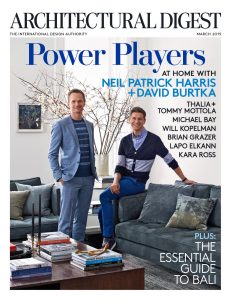 But the award for pure over-the-top glam must surely go to Vanity Fair.  Their Hollywood issue published annually to coincide with the Oscar ceremony, and seconded only by the exclusive party they hold on the night of the awards, outdoes itself this year with Amy Adams, Channing Tatum and Reese Witherspoon gazing seductively from the cover.  Few of us may actually get to enter the exclusive world of ‘Planet Celebrity’, but at least these magazines let us mere mortals experience, vicariously, a little of the magic.