With the release of Fast & Furious 7 (Furious 7 in the US) – the latest instalment in the blockbuster franchise – only weeks away, publicity for the film seems to be appearing on a daily basis. The latest taster of what fans can look forward to – in the form of the new ‘Regal – A Look Inside’ featurette – has just hit the internet. 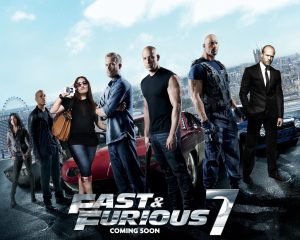 Storylines are, if being honest, not the series’ strongest aspect, generally only there to connect each spectacular, explosion laden set-piece with the next. With this in mind Fast & Furious 7 – directed by Malaysian filmmaker James Wan, better known for such horrors as the original Saw and Insidious, and starring series regulars Dwayne ‘The Rock’ Johnson, Vin Diesel and Jason Statham – looks unlikely to disappoint. If the stills and trailers seen so far are anything to go by the scene looks set for a high octane adventure, which will quite literally blow your mind when it’s released on the 3rd of April.